By Unknown - September 05, 2016
Following a disappointing series loss in Baltimore, the Yankees came ready to play this Labor Day against the Blue Jays. Led by Jacoby Ellsbury and Masahiro Tanaka, the Yankees defeated Toronto 5-1. Ellsbury seems to have responded to Joe Girardi's choice to bench him yesterday in what the Yankees manager referred to as the "biggest game of the season." While the Yankees chances of winning the division are certainly slim, it's nowhere near out of the realm of possibility, making these games against the division-leading Blue Jays even more important. That being said, Yankees got off to a great start to their ten-game home stand, clicking on all cylinders. 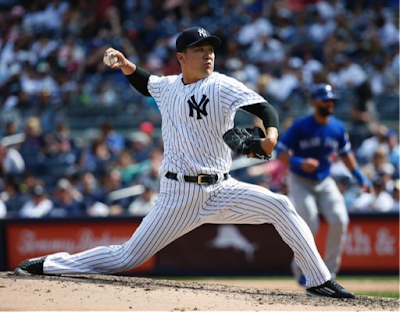 
Masahiro Tanaka struggled out of the gate in the first inning, giving up three hits, but limiting the Blue Jays to only one run. Jose Bautista's RBI single drove in Devon Travis, who led off the game with a double. The Blue Jays were able to take an early 1-0 inning. Fortunately, Tanaka improved as the game progressed, putting together a solid start for the Bombers.

The Yankees responded almost immediately in the bottom half of the first inning. After Brett Gardner led off with a single, Jacoby Ellsbury homered to right field, putting the Yankees on top 2-1. This was not all we'd see from Ellsbury today on the offensive side. With Tyler Austin on second in the third, Ellsbury singled to right, giving the Yankees a 3-1 lead. Austin came to the plate in the bottom of the fourth with runners on first and second, and two outs. He subsequently crushed a double off of the wall in left field, scoring both runners. At the end of four innings of play, the Yankees led 5-1.

Perhaps one of the oddest moments of the game occurred in the top of the fifth inning. With two outs, Bautista attempted to go from first to third on Edwin Encarnacion's single. He was subsequently thrown out courtesy of Gardner's strong throw to third base. Bautista's choice to break one of baseball's cardinal rules (never make the third out at third base) was surely puzzling.

Jonathan Holder relieved Tanaka with a runner on first, and one out in the seventh inning. After getting Travis to fly out to right, Holder walked both Bautista and Josh Donaldson, loading the bases for Encarnacion. Girardi then opted to call on Ben Heller to face the Blue Jays slugger. Encarnacion lived up to his reputation as a Yankee-killer when he proceeded to single to right, trimming the Bombers lead to 5-3. Tommy Layne came on to finally end this stress inducing inning.

The Yankees will hope to build on this victory tomorrow night when they send Luis Cessa (4-0, 4.17 ERA) to the mound against Aaron Sanchez (13-2, 2.88 ERA). Tuesday's pitching matchup is by far the most disadvantageous of the series for the Yankees. Sanchez has been nothing short of phenomenal this season. Cessa has performed well for the Yankees since joining the rotation, but he'll have his work cut out for him tomorrow against the potent Blue Jays offense.