How far can Gary go?

By Unknown - September 17, 2016
Who would have thought that we'd be here? Up until their recent series against the Dodgers, the Yankees were playing the best stint of baseball we'd seen from them all year. Coming off a much needed seven-game win streak, the Yankees look more and more like a team with a chance to make the post season than they had in previous months. If you haven't been living under a rock for these past few weeks, you probably have heard of young slugger Gary Sanchez. 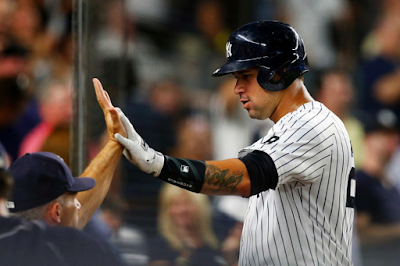 Who is Gary? Well, Gary Sanchez is a 23-year-old who was born in the Dominican Republic capital of Santo Domingo. He grew up a mere 14 miles away in the town of La Victoria. In 2009, the Yankees signed then 17-year-old Sanchez as an international free agent. From then on out, he progressed through the ranks from Rookie A to the major league roster. Prior to being called up, Sanchez had a modest batting average of .282 in 284 Triple-A ABs. It's also worth noting that he had 10 home runs in 71 games. Every time he got raised up a level, his level of performance increased as well.

So it is not a surprising fact that Gary is doing well up in the majors. His ability to adjust after every pitch, paired up with his power, has made him an offensive powerhouse. His ability behind the plate has made him a catcher to be feared. All around, Sanchez is destined to be the next great catcher for the Yanks.

But here’s the question.
How long can this hot streak last?

It goes without question that when a player becomes hot, there is a cool down period. It even happens to the best players in the league. So will this happen to our Gary?

As we take a look at Sanchez's young career, it shows that prior to his call up, he, in all of his minor league experience, had a batting average that was more or less centered around .260. Interestingly, he had not yet cracked the .300 mark for a sustained period of time. It only occurred twice prior to his call up and both happened in Rookie A.

If this pattern continues, Gary will stagnate. Due to his current performance level, I doubt the drop off will be major. It might not even be that bad of a decline. But, this is what the data shows. Obviously, playing at a major league level is much different than playing in the minors. Some players perform better when surrounded by other talented players in the clubhouse.

In many ways, baseball is a mental game. If one is in a good state of mind (in the zone) and seeing the ball well, one will succeed. The opposite is true too. It all depends on how one approaches the given situation.

So will Gary Sanchez keep this positive state of mind going?