Luis Severino's future is still up in the air

Will he be a part of the starting rotation for the Yanks from here on out? Or will he embrace his newfound role in the bullpen? Severino's future is still up in the air when it comes to what role he will fill after this season. There are many who argue that he'll become a real productive pitcher if he's limited to pitching one to two innings in relief, rather than having him pitch as a starter. 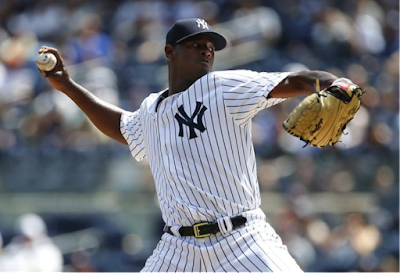 
There is no question that Severino has the potential to be a real gem, if polished the right way. If we take a look at his arsenal, it clearly shows pitches that can make him a very dominant pitcher.
Severino has three primary pitches;

He has the “stuff” to do great things in the rotation. But, this season was not his best in that regard. Prior to being sent down to the minors, Severino was absolutely dreadful. There was a sense of hope that he could reclaim his 2015 dominance. Severino performed at a high-caliber level that made him earn a healthy 2.89 ERA after 62.1 innings pitched.

From that impressionable rookie year to this sophomore season, Severino has transitioned from an inevitable solid starter, to a player whose future is still in question. This season, prior to his eventual demotion to the minors, Severino preformed below everyone’s expectations. In the first month of the season; in just 4 appearances, Severino gave up 15 runs in 19.2 innings, and reached an ERA of 6.86. Things didn’t get better next month either, as he hit rock bottom.

Soon, The Yanks had enough of Severino's pitiful outings, and demoted him to Triple-A. This proved to be a great experience for Severino, as he readjusted his approach. In his first game back to the Majors, he came in from the bullpen to pitch for two innings. He struck out three of the six batters he faced. He followed up with another two inning game against Tampa Bay for similar results.

It looked as if Severino might be back to the form he exhibited in his rookie season. Coming on in relief in a memorable outing against the Mets, Severino struck out a third of the batters he faced in four innings, earning his first victory of the season (1-6). But just as it seemed that Severino had turned his season around, he responded with two dreadful starts against the Red Sox and Rays. In 6.2 innings, he surrendered 12 runs. He was soon taken out of the rotation and put in the bullpen.

During his stay in the bullpen he has only given up one run in 15 innings pitched. He's also struck out 15 out of the 20 batters that he's faced.

This raises a fundamental question moving forward: Is Severino better off in the bullpen?

It is fair to say, that in limited action, Severino shines better than as a starter?  In just eight appearances in relief during the month of September, Severino has performed as well as any other reliever in the team.

There are many pros and cons when considering the options that the Yankees management can take. If they decide to try Severino as a starter again, there is much upside as Severino is still a very young pitcher. This can in turn produce a great outcome for the Yanks as Severino possesses the skills and talent to become a excel as a starter, as is evidenced by his first year performance. On the other hand, they run the risk of having Severino break down again just as he did in his first few starts this season. Should the Yankees decide to take the bullpen route, it can still work in the team's favor. So far, Severino has posed a great threat to batters coming out of the bullpen. On the flip side, it can also hinder the potential that Severino possesses.

Needless to say, Luis Severino is a raw gem that, regardless of what his ultimate role in the majors turns out to be, will still be an asset for the Yankees moving forward.