By Chad Raines - September 15, 2016
The Yankees dropped a heartbreaker by a score of 2-0 to the LA Dodgers yesterday after Dellin Betances had a ninth inning he would like to forget. The Yankees closer had an abysmal inning allowing two LA runs to score leading to New York losing two of three. The Bronx Bombers head North on I-95 for a four game weekend showdown against their long time rivals the AL East division leading Boston Red Sox. The Yankees have played their way back into the playoff race along with Baltimore and Toronto as they all sit just a few games behind the first place Boston Red Sox. New York could really push themselves even closer to a playoff spot with a good series against their historic foes. It has been ten years since both teams were really fighting hard for a playoff spot this late in the season. Strap in folks there is sure to be some fireworks at Fenway this weekend, it’s Yanks and Sox with the division title on the line. 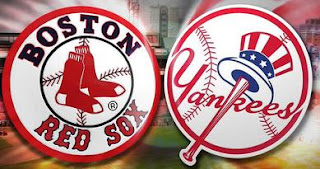 Masahiro Tanaka (13-4, 3.14 ERA) vs. Eduardo Rodriguez (2-7, 4.70 ERA)
The Yankees will throw their ace on Thursday in an attempt to start the series off on a high note. Tanaka has been the Yanks’ best pitcher all year long and has been a model of consistency in an otherwise inconsistent rotation. This is the type of game the Yankees gave him that big contract for and I think he will step up and pitch a gem even against a very potent Red Sox offense. Boston will counter with young Eduardo Rodriguez who has been very up and down throughout his young career. Two starts ago, Rodriguez had a no-hitter going through eight innings but then had a poor start his last time out against the Blue Jays. He’s had fairly good success against the Yankees but has seemed to have trouble getting out Yankees center fielder Jacoby Ellsbury, who has left the yard three times against the young southpaw.

GAME TWO: (Friday September 16, 2016 | 7:10 PM ET)
Luis Cessa (4-1, 4.34 ERA) vs. Clay Buchholz (6-10, 5.31 ERA)
I hope the people in the Green Monster seats brought their gloves for this one because we could be seeing a large amount of home runs. New York will throw youngster Luis Cessa who is coming off his first loss of the season. He’s shown flashes of being a solid pitcher that could contribute to the rotation but the jury is still out on the young righty. He will be tested against a very patient Boston lineup that leads the league in runs scored. Cessa will be opposed by Red Sox veteran Clay Buchholz who has split the year between the starting rotation and the bullpen. An injury to Steven Wright forced the Sox to put the 32-year-old back into the rotation where he has had mixed results. Buchholz still has the ability to stymie an offense but as we saw in his last start, he also has a tendency to implode.

GAME THREE: (Saturday September 17, 2016)| 1:05 PM ET
Bryan Mitchell (1-1, 2.45 ERA) vs. David Price (16-8, 3.81 ERA)
The Yankees are sure glad to have Bryan Mitchell back as the young righty spent a majority of 2016 on the DL. He draws a tough matchup in game three as he’ll be opposed by the ace of the Red Sox, David Price. Price has been incredible in his last eight outings making up for early season struggles. New York has hit the star lefty well in the past and they’ll hope that trend continues in this crucial series.

GAME FOUR: (Sunday September 18, 2016)| 8:08 PM ET
CC Sabathia (8-12, 4.10 ERA) vs. Drew Pomeranz (10-12, 3.25 ERA)
The final game of this series will be nationally televised on ESPN and feature two southpaws. The Yankees will throw out the veteran lefty CC Sabathia who has seemingly faced the Red Sox 6,000 times in his eight years in pinstripes. Sabathia has had a decent year for New York and I think many Yankee fans have to be happy they’ve gotten as much as they have out of him this year. As was so many times in the past, the Yanks will ask their work horse lefty to pitch them to victory over Boston as he has done countless times in the past. The Red Sox starter will be Drew Pomeranz who has faced the Yankees twice previously in 2016, the first time as a member of the San Diego Padres and the second as a member of the Red Sox last month.  Pomeranz got shelled in his last game Tuesday against the Orioles and has a 6.28 ERA over his last three starts. The Yankees will hope his struggles continue and look to tag him early in the game.
Three Yankees to Watch:

1. Gary Sanchez- Sanchez has become a fan favorite due to his majestic long balls and cannon arms. He’s been the guy in the Baby Bombers youth movement and is a future star in this league. The Red Sox pitching has been much better in the second half of the season but getting this guy out is no easy task. Look for Sanchez to put a few dents into the monster this series.
2. Masahiro Tanaka- The Yankees will be counting on their ace to get them a win in game one. Every game at this point in the season is crucial but starting the series off on the right foot in Boston is huge. If anyone in the Yanks pitching can keep the Red Sox bats at bay, it’s Tanaka.

3. Jacoby Ellsbury- Ellsbury has enjoyed a lot of success at Fenway Park, of course during his seven years in Boston and the past three in New York. He’s also hammered Red Sox game one starter Eduardo Rodriguez in his career. While Sanchez is the Yankees future star, it is Ellsbury who is still the teams most dynamic player. He can beat teams in so many ways and you know he’s just itching to take down his old ball club when it matters the most.
Three Red Sox Players to Watch:

1. David Ortiz- I swear Yankees fans, it’s almost over. Just seven more games (not including playoff matchups) that you’ll have to deal with this man. Ortiz has made a living of killing the Yankees since joining Boston in 2003. No tears will be shed from the Yankees or their fans once Big Papi retires. However it would be typical Ortiz fashion for him to go off and have a great series to go along with the stellar last year he’s having. As always, New York pitching is going to have to be very careful every time number 34 steps into the box.

2. Chris Young- Young’s playing time will more than likely decrease a little bit with young sensation Andrew Benintendi being activated from the DL, but Young will still be a big performer in this series. The former Yankee signed a two-year deal with the rival Red Sox in the offseason and has been everything the Red Sox hoped for. He’s as good a platoon player as you can find and has played excellent baseball since returning from a lengthy DL stint. Whether he’s starting or pinch hitting, Young has the type of power that can play big late in these important September games.

3. Dustin Pedroia- Pedroia has been scorching hot lately. (Seriously, look at the Red Sox box scores for the past three weeks). It seems like every game the firecracker 2nd baseman has two or three hits. All the while, the former MVP has played his usual stellar defense. Pedroia is now the Red Sox leadoff hitter so if you can contain him you have a better shot at neutralizing their juggernaut offense.

Prediction:
Both teams have the potential to go on great runs (we saw New York rattle off seven straight wins recently) and put themselves in the drivers seat. However, I don’t think this series is the starting point for either club. I think this series ends up in a split. The Red Sox will win games two and three while the Yankees will take games one and four. I expect three of the fours games to be really close good baseball games. As always seems to happen, there will more than likely be a blowout in there, but nevertheless, it should be a great series. One good thing for the Yankees is that they will miss CY Young candidate Rick Porcello this series. It should be a fun few days at America’s Most Beloved Ballpark.