By Unknown - September 21, 2016
The Yankees were able to stop the bleeding of a five game losing streak by defeating the last place Tampa Bay Rays on Tuesday by a score of 5-3. The seemingly unstoppable Gary Sanchez hit a clutch three- run home run to stamp a much needed Yankees victory at Tropicana field. The Yankees entered Wednesday’s game 3.5 games back for the second wildcard spot. 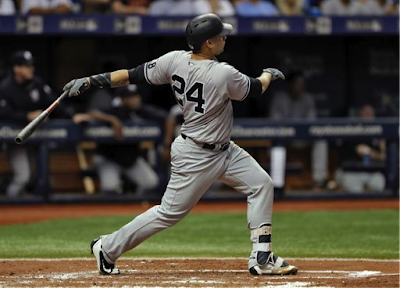 Masahiro Tanaka took the hill for the Yanks while pitching as a true ace over his last eight starts going 6-0 and has the best ERA in the American League (2.97).  He opposed Alex Cobb, who had been 1-0 thus a 3.06 ERA for Tampa.

The Yankees got off to a torrid start over the first two innings by scoring seven runs. Gary Sanchez went 2-2 within the first two innings with an RBI single and another three-run home run in the second inning.  Other runs were contributed by Brian McCann and Ronald Torreyes as well.  Tanaka was strong and confident with a 7-0 lead until he gave up home runs to Bobby Wilson, and back to back to back home runs to Evan Longoria, Brad Miller and Corey Dickerson in the bottom of the third inning to make it 7-4.

Sanchez turned on another high fastball to hit his second home run of the game in the top of the sixth to make it 8-4.  It is truly remarkable to watch this guy hit a baseball because he has 19 home runs in his first career 45 games (which has never been done), and averaging a home run every 9.84 plate appearances.

Tanaka didn’t have his good stuff after inning number two, but battled for command and bite on his off speed pitches going six innings and allowing four runs on seven hits.  This game also bumped Tanaka’s season ERA to 3.07.  Alex Cobb only pitched 1.1 innings and put stress on Tampa’s bullpen to finish the remaining 8.2 innings.  Adam Warren came in to pitch 1.1 innings as he served up a second home run to Tampa first baseman Brad Miller to make it a potential save situation.  But then the save situation was no longer apparent as Mason WIlliams and Donovan Solano tacked on three more runs in the nineth inning to make it 11-5 and avoid using Dellin Betances.

The Yankees round out their series with Tampa on Thursday night at 7:10 PM as young pitcher Bryan Mitchell faces veteran lefty Francisco Liriano.