By Chad Raines - September 05, 2016
Despite dropping two of three games to the Baltimore Orioles, the Yankees still sit just 3.5 games out of the second wild card spot going into a pivotal three game set with the Toronto Blue Jays. The Yankees will kick off the series in the Bronx with their ace Masahiro Tanaka on the hill and he will look to get the Yankees on the right track in getting a much needed series victory. The pressure is mounting in New York as every series is a must win if they want to gain ground. 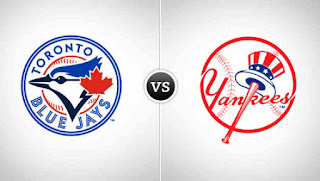 Aaron Sanchez has been battling with Marco Estrada all season for the title of the Blue Jays' ace of their rotation. Unfortunately for Sanchez, the Jays have been looking to limit his innings which is why they recently demoted him for a week and a half in August to limit his inning count. That is something to watch for in this game as it is unlikely he throws more than six innings or so. The Yankees will need to keep the game close then go to work when Toronto's unimpressive bullpen gets to work. Luis Cessa will be making fourth start of the season in game two of this series. As a starter, Cessa is 2-0 with a 3.00 ERA and has three straight quality starts. Going up against Sanchez and a tough Toronto offense, this could be a tough game for the Yankees, so Cessa will need to continue his momentum into this start.
Game Three (Wednesday, September 7 at 7:05 PM ET)
Marcus Stroman (9-6, 4.58 ERA) vs. TBD

Many expected 2016 to be a breakout season for Marcus Stroman. Coming off an ACL injury that caused him to miss the majority of the 2015 season before returning for the last month, Stroman entered this season healthy and fresh off a 1.67 ERA in four starts. However, this season has been a letdown for Stroman as he has endured a roller coaster season. The Yankees will need to hit him hard and take the series finale to win this series. The Yankees have yet to announce their starter for this game as they will look to have someone take Chad Green's spot in the rotation as he will miss the rest of the year with an arm injury.

Three players to watch for the Yankees

1. Gary Sanchez
After winning the AL Player and Rookie of the month honors in August with his incredible .389/.458/.832 (1.290 OPS) line and nine doubles, 11 home runs, and 21 RBIs, Sanchez will look to continue contributing in a big way in September in the Yankees playoff push. Obviously, Sanchez won't sustain that pace, but his consistent middle of the order presence could go a long way for the Bombers.

2. Luis Cessa
Luis Cessa's battle for a starting rotation spot has effectively begun since joining the rotation this year, and he surely couldn't be happier with his performance. Cessa is going to look to continue his strong rookie campaign with a huge start in game two.

3. Aaron Judge
With two more strikeouts on Sunday, Aaron Judge has now struck out in 45.7% of his plate appearances (32 K's in 70 plate appearances). Although he was expected to experience growing pains, these numbers are still very alarming going forward as he is going to have to focus in on putting the ball in play, and it starts in this series at home against Toronto.
Three players to watch for the Blue Jays:
1. Edwin Encarnacion
In a contract year, Edwin Encarnacion is driving in runs at a career rate with 36 homers and 108 RBIs. Encarnacion is in for a big pay day this offseason and his performance down the stretch will influence the Blue Jays' playoff standing immensely.

2. Aaron Sanchez
After being demoted on August 20 and recalled on August 31, Aaron Sanchez will make his second start since being called back up to the major leagues. He's arguably been the Blue Jays' best starter this year and him and Marco Estrada will be battling for who will get the big game starts in the playoffs with their outings down the stretch run.

Three things to watch for:
1. Luis Cessa goes for his fourth straight quality start:
Since joining the rotation, Luis Cessa has been lights out pitching to a 3.00 ERA in three starts while posting a quality start in all three. Cessa threw one scoreless inning against Toronto on May 24, but this will be his first start against the potent offense. This is a big test for the 24-year-old righty who is auditioning for a spot in the starting rotation in 2017.

2. Aaron Judge returns home
Although the sample size is minuscule, the home/road splits of Aaron Judge are noteworthy. The 6'7" outfielder is hitting .320 with two home runs in eight games at home (10 strikeouts in 25 at-bats) compared to an abysmal .081 average on the road with one home run in 11 games (22 strikeouts in 37 at-bats). Judge will certainly look to get back on track in the friendly confines of Yankee Stadium.

3. The effectiveness of the bullpen:
The Yankees seem to have a serviceable core in the bullpen with the newcomers in Blake Parker (3.60 ERA), Tommy Layne (2.00 ERA), Tyler Clippard (0.64 ERA), and Adam Warren (3.24 ERA). All these guys have combined to be the bridge to Dellin Betances at the back end and they have provided a formidable bullpen since joining the team. The relievers outside of this group will be the question, but if this group can hold things down, the Yankees odds of winning increase significantly.
Keys to a series victory:
1. Get on the board early
2. Cut down on strikeouts at the plate
3. Limit the Toronto long ball

Prediction:
In a must-win series, I'm looking for the Yankees to answer the bell and take two of three against their division opponent. The Yankees need to gain ground one game at a time and if they could leave this series 2.5 games out of the second wild card spot, that would propel them into a prime position to make a run at it over the last three and a half week of the regular season.