By Chad Raines - September 20, 2016
Coming off of a rough four game sweep of the division leading Boston Red Sox, the Yankees are looking to rebound against the Rays who are 21 games under .500. This will be the fourth and final series against Tampa Bay as the Yankees have gone 5-4 against them so far this season. The Yankees are coming into this series four games behind the second wild card spot. With October looming, a series win is crucial if the Yankees want to preserve any hopes of reaching the playoffs this season. 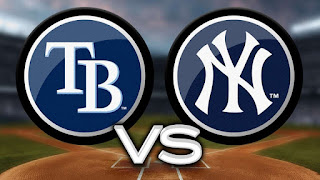 Game One (Tuesday, September 20 at 7:10 PM ET)
Michael Pineda (6-11, 4.94 ERA) vs. Drew Smyly (7-11, 4.98 ERA)
The Yankees will take on the former Arkansas Razorback grad in the first game of the series. Drew Smyly has dominated the Yankees in two starts this season going 2-0 with a 2.08 ERA over 13 innings pitched. This is a completely different Yankees lineup from what Smyly last faced on July 30th. The Yankees will try to jump on him early and often as Drew has struggled mightily with a 7.02 ERA over his last three outings.

Michael Pineda will try to continue to work off of his somewhat solid start to September. In three starts this month Pineda has a 2.95 ERA but is yet to register a decision after his last outing against Clayton Kershaw and the Dodgers was cut short due to a rain delay. The Rays have had Big Mike’s number all season as he has already faced them four times this season. He has 0-3 with a horrendous 9.38 ERA over 19.2 innings pitched. Pineda will look to bounce back and keep the Yankees’ playoffs hopes alive.

Game Two (Wednesday, August 21 at 7:10 PM ET)
Masahiro Tanaka (13.4, 2.97 ERA) vs. Alex Cobb (1-0, 3.06 ERA)
Alex Cobb will make only his fourth start of the 2016 season after recovering from last season’s Tommy John surgery. Two weeks ago, Cobb made his second start of the season against the Yankees and he registered a no-decision going six innings while allowing three runs. Cobb has a funky delivery which is what can make him dominant at times. Cobb and the Rays will try to play spoiler on Wednesday night.

Masahiro Tanaka has been all that and then some for the Yankees this season. I’m not sure anyone could have predicted the type of CY Young caliber season the Yankees ace is having. Despite an up and down season for the Bombers, Tanaka has remained the one constant in the Yankees rotation all season. Masahiro Tanaka has not registered a loss since 08/02 against the New York Mets and will try to stay on track against the anemic Tampa Bay offense.
Game Three (Thursday, September 24 at 7:10 PM ET)
Luis Cessa (4-2, 4.44 ERA) vs. Blake Snell (5-8, 3.87 ERA)
Blake Snell, who made his MLB debut against the Yankees back in April, will make his fourth start of the season against New York. Snell has struck out 18 Yankee hitters over only 13 innings of work this season. Blake’s last start against the Yankees came two weeks ago when he only lasted only 2.2 innings while throwing 88 pitches. Snell has shown that he can be erratic at times and the Yankees need to take advantage and work the count to get into the susceptible Rays bullpen.

Luis Cessa got off to a decent start in the Yankees rotation but hasn’t registered a win since August 26th. Cessa’s last outing against the Rays came on September 11th when he surrendered four runs in only 5.2 innings pitched. Should the Yankees come away with the first two games of the series; the 24-year old right hander will need to come up big to keep the Yankees playoff hopes alive.

Players to watch for the Yankees

Gary Sanchez
The legend of Gary Sanchez continues. The rookie catcher has already slugged 16 home runs in only 41 games this year and he hasn’t showed any signs of slowing down. Although it’s highly unlikely because he hasn’t played even half of a full season, a lot of people like Sanchez to get some votes for AL Roy.
Billy Butler
After being claimed in a surprising move, Billy Butler has done well in his first four games with the Yankees going 4-9 with one home run and four RBIs. The veteran first baseman and designated hitter will look to get some at bats as the Yankees head down the final stretch with what’s turning out to be an injury riddled roster.
Did Gregorius
Perhaps the most improved Yankee of 2016, Didi will look to build on a strong campaign in his final series against the Rays this season. Didi has been on fire over his last seven games slashing .348/.400/.565. Like Tanaka in the rotation, Gregorius has been one of the only consistent producers in this year’s Yankees lineup. Didi’s batting average is currently 13 points higher with nine more homeruns and 10 more RBIs than he had in 2015.

Players to watch for the Rays

Evan Longoria
One of the most underrated baseball players in the game, Longoria has been on a torrid stretch over his last seven games with four long balls and a .355 batting average. For the season Longoria has 35 home runs and 94 RBIs in a below average offense. The Yankees have to make sure he doesn’t beat them.

Brad Miller
As stated earlier, the Rays offense is pretty anemic and doesn’t warrant much attention, but Brad Miller is a serious power threat in the middle of the Tampa Bay lineup. His 28 long balls are a career high for him although he has struggled over his last 30 games batting just .189 with four home runs. Miller will have the luxury of facing Michael Pineda in game one who has surrendered 24 home runs already this season. Don’t be surprised if Brad puts one in the seats on Tuesday night.

Kevin Kiermaier
Sure Kiermaier’s statistics are nothing to gawk at, but the guy is an all-around playmaker. Whether he’s putting down a drag bunt, stealing second or robbing an extra base hit in the outfield, Kiermaier always seems to be in the middle of things. Kevin is batting .333 over 10 games against the Yankees this season. The Ray’s center fielder is batting .245 for the year with 12 home runs and 36 RBIs while swiping 20 bases. Kiermaier has the potential to be a 20 home run/20 stolen bases type of guy as he continues to develop.

Things to watch for

Yankees Bullpen
It’s simple, really. If the Yankees bullpen performs at all like they did against the Boston Red Sox this past weekend it will be a long, disastrous series. With this weak Tampa Bay lineup I don’t see the Yankees pitching having nearly as many problems closing out games but you never know anymore with the inexperienced back end of the bullpen. The Yankees can only hope that the day off between series helped refocus and re-energize the Yankees’ relievers. If Pineda, Tanaka and Cessa do their job, the Yankees bullpen might not get much work this series after all.

Rays Home Runs
The Rays best hitter far and away is Evan Longoria but everyone in their lineup has home run power. The Tampa Bay Rays come into this series ranking fifth in baseball in home runs with 205. The Yankees pitching staff also ranks fifth in most home runs allowed in baseball with 197. Prepare to see a lot of home runs at the Trop this week.

Prediction
This series should be a lot easier on the Yankees than this previous weekend let down. This is the last time in 2016 that the Yankees will play a series against a team that is under .500 with their final 12 games coming against Toronto, Boston, and Baltimore. The Yankees have really hit a wall over their current five game losing streak and now the rumor is that Starlin Castro may be out for the season. The Yankees will need to get the offense going early and often if they want any chance at a series win against the Rays. I like the Yankees to take two out of three in their season finale against the Rays.