Should the Yankees look at Luis Severino as a reliever?

By Unknown - September 06, 2016
The 2016 season hasn't exactly gone the way the Yankees had planned it would for Luis Severino. After helping solidify a rotation in the midst of a playoff run last season, Severino has suffered his share of setbacks thus far. In 2015, he went 5-3 in 11 starts, while putting up a 2.89 ERA. Having been handed a rotation spot after spring training, Severino struggled immensely out of the gate, going 0-6 in seven starts before being placed on the disabled list, and subsequently demoted. Interestingly, two of Severino's best performances this year have come out of the bullpen. While many analysts have argued that the young right hander's stuff translates better in a relief role, the Yankees seem insistent on having him figure things out as a starter. Due to his age and potential, I'm not advocating that we abandon hopes of Severino becoming a successful starting pitcher, however the possibility of him ending up as a dominant reliever warrants further discussion. 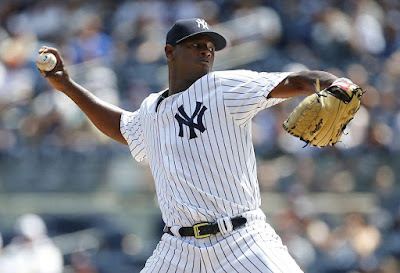 As we know, the Yankees do not have the best track record when it comes to developing starting pitchers. In fact, I can't think of an above starter to come through the Yankees system since Andy Pettitte! The list, which consists of Joba Chamberlain, Phil Hughes, Ian Kennedy, Manny Banuelos, and Andrew Brackman, is quite extensive. On the other hand, they've done a much better job when it comes to the bullpen. This comparison may be a bit premature, but some parallels can be drawn between Severino and Dellin Betances, our current closer. Many within the Yankees organization expected Betances to take the next step as a starter. After witnessing him excel out of the bullpen, the Yankees realized that was the best spot for Betances. Are we seeing the same phenomenon occur with Severino?

I understand that there are many distinctions that have to be drawn between the two, of course. First and foremost, Severino has actually seen success as a major league starter. After each of his demotions this season, Severino has also excelled as a minor league starter. We know the potential is there. Is it simply a matter of him figuring it out mechanically? Or, is he just better suited as a reliever? We also must look at their respective ages. By the time Betances got a legitimate shot with the Yankees, he was already 26-years old. Severino is still only 22. He has plenty of time to work it out, but the Yankees should keep the door open for all possibilities.

The two performances that really stood out to me from Severino this year were against the Mets on August 3rd, and the Orioles this past Sunday. Coincidentally, or not, these two performances were his only victories on the season. They also both came in relief. Coming on in relief of a struggling Chad Green against the Mets, Severino seized control of the game, allowing the Yankees offense to do damage against their opponents. Severino pitched 4.1 innings, allowing only one run, while striking out five. I still remember the electricity that was present in the stadium when Severino was on the mound dominating the Mets lineup.

On September 4th against the Orioles, in a game the Yankees absolutely had to win, Severino delivered. Coming on in relief of the ever frustrating Michael Pineda, the young right hander pitched two scoreless innings, thus providing an effective bridge towards the more solid back of the bullpen. Pineda, who only lasted four plus innings, did not provide the Yankees with what they needed in this crucial game. Severino was able to not only work his way out of Pineda's jam, but also pitch another scoreless inning. Having such a dominant arm out of the bullpen for middle relief could prove to be a huge asset for the Yankees as we move forward in this wild card race.

Since Severino was the prime candidate to take the injured Green's spot in the rotation this Wednesday, we will likely see Bryan Mitchell get the nod. This means that barring either an abominable for performance from Mitchell, or other unforeseeable circumstances, Severino will continue to work out of relief for the Bombers. We all may have wanted to see the youngster take the next step as a starter this season, but that's not likely to happen. With this team surprisingly still in the thick of things, the Yankees have to put the best possible team together. As of now, even with the mess that is the starting rotation, Severino serves the Yankees best out of the bullpen.

I've never really considered myself to be a statistically minded person, however such numbers substantiate a case for Severino to remain in the bullpen. In nine starts this season, opponents are hitting .340 against Severino, with 10 home runs. His five relief appearances, which I'm aware is a small sample size, have told a completely different story. Opponents are only hitting .179 against Severino the reliever. This may be attributed to him feeling less pressure coming out of the bullpen, or there could be more to it. Severino has pitched significantly better when first entering the game as opposed to when he's been on the mound for extended period of time. On the first 30 pitches he's thrown in a game, which we could estimate consists of the first two innings of a performance, opponents are hitting .182 against him on the first 15, and .281 through 30 pitches. This continues to as he moves through a game, and presumably faces hitters multiple times. On pitches 31-45, the average increases to .400, and on pitches 46-60 it goes slightly down to a still alarming .364.

We all hope that Luis Severino will play a significant role in the Yankees future moving forward. As some may have predicted, he's going through his share of growing pains. The Yankees should in no way abandon plans for him to become a starter in the long-run, but they should monitor the possibility that he may end up having to become a reliever, maybe even a very dominant one at that. The current statistics seem to indicate the Yankees would be best served by Severino working out the bullpen this season. They should respond accordingly. I fully expect the Bombers to head into spring training next season hoping he can take the next step as a starter. If he can't, the bullpen becomes an even bigger possibility. Severino has the potential to be a very good pitcher in this league. Whether he ends up proving this as a starter, or as a reliever, has yet to be seen. This a question that the Yankees will find themselves pondering this offseason.