By Unknown - September 08, 2016
The Yankees won a thriller this Thursday night in the Bronx, pulling to within two games of the second wild card! Fresh off an invigorating sweep of the Toronto Blue Jays, the Bombers proceeded to welcome the last place Rays to the Bronx for four games. Despite a rocky pitching performance from CC Sabathia, the bullpen of misfits somehow pulled through, buying enough time before Tyler Austin's dramatic walk off home run. 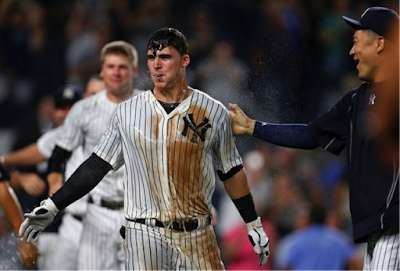 
Sabathia was plagued by the long ball during his short time on the mound. With one out in the first, Kevin Kiermaier, who has evolved into quite the Yankee killer, took Sabathia deep, giving the Rays an early 1-0 lead. The Yankees quickly responded in the bottom half of the inning. Didi Gregorius' RBI single brought in Brett Gardner, tying the game at one. Rays starter Alex Cobb didn't do much to help his own cause. With Jacoby Ellsbury on third, and Gregorius on first, Cobb's attempted pick off went array. His errant throw to first allowed Ellsbury to score, handing the Yankees a 2-1 lead.

Shutdown innings did not exist for Sabathia on this Thursday night in the Bronx. Steven Souza Jr. led off the top of the second with a solo shot of his own, tying the game at two. The Yankees once again responded in the bottom half of the inning, by way of a Brian McCann solo home run, his 18th of the year, putting the Bombers up 3-2.

After Sabathia departed with runners on first and second and no outs in the fifth, Jonathan Holder induced a quick double play. With a runner on third and two outs, home plate umpire Mike Everitt called a balk on the young right hander. After conferring with his fellow umpires, the call was surprisingly overturned. Unfortunately for the Bombers, the night of multi home run performances continued. With one out in the sixth, Souza Jr. hit an absolute bomb over the restaurant in center field, tying the game at four.

The Yankees bullpen, despite Adam Warren, Tyler Clippard, Luis Severino, and Dellin Betances not being available, was able to limit the Rays to one run in five innings. In the bottom of the ninth, Tyler Austin finished this one for the Bombers, giving them their fifth straight win.

The Yankees will hope to build on this dramatic victory when they send the aggravatingly inconsistent Michael Pineda (6-11, 5.11 ERA) to the mound tomorrow night. Pineda will face off against Blake Snell (5-7, 3.39 ERA), who will take the ball for the Rays.