By Unknown - September 01, 2016
For the second straight night, these two teams went to extra innings tied at four, behind a playoff-like atmosphere. After picking up consecutive quality outings in his first two career starts, Luis Cessa struggled early on the road tonight in Kansas City, before bouncing back and giving them a solid outing. The Yankees win moves them back to being just 2.5 games back in the hunt for a playoff spot. 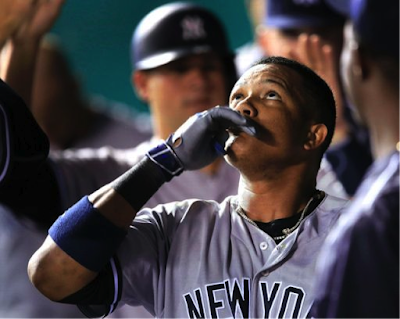 
For the second straight night, these two teams went to extra innings tied at four, behind a playoff-like atmosphere. After picking up consecutive quality outings in his first two career starts, Luis Cessa struggled early on the road tonight in Kansas City, before bouncing back and giving them a solid outing. The Yankees win moves them back to being just 2.5 games back in the hunt for a playoff spot.

The Royals set the tone early, scoring a run in each of the first three innings. Two batters after Cheslor Cuthbert’s first inning single, Kendrys Morales launched a two-out, two-run homer to center field. The Royals scored another in the second, as Chase Headley’s error allowed Paulo Orlando to reach and Alcides Escobar then doubled him home. Eric Hosmer’s 19th homer of the year pushed their lead to 4-0. While the Royals scored four runs in the first three innings, the Yankees accumulated just one hit, a Gary Sanchez double in the first, which extended his hitting streak to nine games.

After a quiet first five innings, the Yanks picked up three runs in the sixth. The inning started with a single from Jacoby Ellsbury and a walk from Gary Sanchez. Ellsbury scored on a sacrifice fly from Didi Gregorius and Starlin Castro followed with a two-run homer, his 19th of the year, the most among current Yankee players (Beltran had 22 before leaving). Then, they tied it up in the seventh. Two base runners reached, as Aaron Hicks walked and then Brett Gardner singled off the new pitcher Scott Alexander. Jacoby Ellsbury made the score even at 4 on a sacrifice fly to center. After the Gardner single in the seventh, neither team had a hit until the 12th, which was a leadoff single by Chase Headley.

Luis Cessa really struggled in the early going against an offense that has been quite pedestrian this season. After allowing five hits in the first 2.1 IP, he retired 11 of his last 12 batters. He ended up giving the Yankees six innings, allowing three earned runs (one unearned) on the night. The youngster showed resiliency tonight and has shown the capability to provide decent outings, even when not having his best stuff. His counterpart Ian Kennedy put up similar numbers, also going six innings and allowing three runs on six hits. The former Yankee was dominant early, before getting roughed up in the sixth and seventh.

Chasen Shreve took over in the seventh, one night after picking up the save in a thrilling victory last night. Raul Mondesi worked his way to a leadoff walk. Jarrod Dyson then sacrificed, moving Mondesi to second. With Mondesi at second and one out, he attempted to steal third, but Shreve picked him off at third. He was seven for seven in base stealing attempts on the season before getting caught by Shreve. Shreve ended the inning by striking out Cheslor Cuthbert and then pitched a 1-2-3 eighth. The bullpen didn't allow a hit all night, a group that included Tommy Layne, Adam Warren, Blake Parker, and Ben Heller.

The extra innings were certainly intriguing, as each team had chances. The Royals had second and third with two outs in the 11th before Paulo Orlando lined out to end the inning. In the 12th, New York had bases loaded with one out. Gary Sanchez then lined out and Mark Teixeira swung at a ball four, resulting in a ground out. Gregorius led off the 13th for the Bronx Bombers with a single, followed by a Starlin Castro double. Brian McCann’s sacrifice fly, the Yankees’ third of the night, ended up scoring the game-winning run.

The Yankees will have Thursday off, before heading into another crucial three-game series with the Orioles. This may be New York’s last chance at making the playoffs, as they must pick up a series win in Baltimore. They start off the series at 7:05 PM EST on Friday, as Chad Green (2-3, 4.09 ERA) heads to the mound to face Dylan Bundy (7-5, 3.71 ERA).