By Unknown - September 16, 2016
It's becoming painfully clear that the Yankees were overachieving for the last month or so. The rotation is nothing special, the bullpen (with the exception of a few pitchers) is an absolute disaster, and the offense is average, at best. The Yankees suffered yet another frustrating defeat at the hands of their longtime rivals this Friday in Boston. Losing their third straight, and fourth of their last five, the Yankees playoff chances are becoming more improbable by the day. The debilitating effects of yesterday's Joe Girardi-induced ninth inning implosion most likely had a detrimental impact on the Yankees performance in this one. 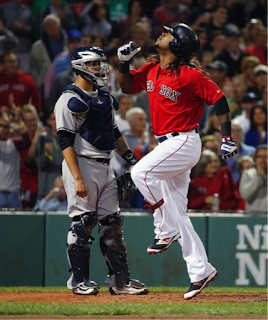 The Red Sox dominated the Bombers for the entire game, starting in the first inning. Perennial Yankee-killer David Ortiz started off the scoring for Boston with an RBI single that plated Xander Bogaerts, handing the Sox a 1-0 lead. Ortiz was subsequently thrown out when attempting to stretch the single into a double. Hanley Ramirez's RBI single in the second extended the lead to 2-0. In the fourth, Ramirez hit a solo shot, making it 3-0 Boston.

The Yankees were able to get on the board in the fifth inning, courtesy of none other than Gary Sanchez. His RBI double brought home Mark Teixeira and Mason Williams, making it a one-run game.

Things immediately went downhill for the Bombers once Girardi pulled Luis Cessa following five innings of three-run ball. The Red Sox tacked on two more in the sixth, before blowing things open in the seventh with two more runs. Jackie Bradley Jr.'s twenty-fifth home run of the season made it 6-2 Red Sox. With the bases loaded and nobody out, Mookie Betts hit into a double play, but the runner on third did score. By the end of the inning, the Red Sox had a comfortable five-run lead.

The newest Yankee, Billy Butler, blasted a two-run homer over the Green Monster in the ninth inning to bring the Bombers back into the game, albeit for a short two-thirds of an inning.

The Yankees will hope to salvage the next two games of the series, though it may be too late for them. Tomorrow afternoon, the Bombers will send Bryan Mitchell (1-1, 2.45 ERA) to the mound against the grossly overpaid David Price (16-8, 3.81 ERA).