By Unknown - September 17, 2016
Having lost five of their last six, the Yankees came into Saturday’s game desperately needing to turn things around if they want to continue playing meaningful September baseball. They couldn’t muster a win against their bitter rivals, squandering an early lead to fall to 77-71 and 4.5 games out of the second wild card. 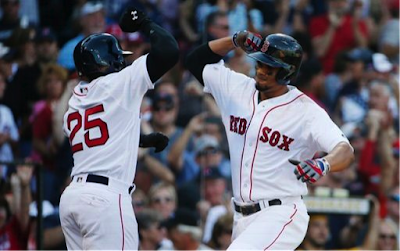 The Yankees jumped out to a lead in the third inning behind a triple from Brett Gardner and a towering homer from Gary Sanchez. Austin Romine led off with a base hit to left field, and following a Rob Refsnyder strikeout, Gardner ripped one past Jackie Bradley Jr. into the center field triangle for a standup RBI triple. Jacoby Ellsbury grounded out to first, and Gary Sanchez followed with a towering home run over the Green Monster to push the lead to 3-0. In the bottom of the inning, though, the Red Sox fired right back with two runs of their own behind doubles from Andrew Benintendi and Xander Bogaerts, and an RBI groundout by David Ortiz.


The Yankees would pad their lead in the fourth, as Didi Gregorius and Chase Headley hit back-to-back singles and Austin Romine scored them both with a two-run double off of the Green Monster.


Severino got into some serious trouble in the bottom of the sixth, giving up a double to Hanley Ramirez and walking Bradley Jr. and Benintendi to load the bases with two outs. Severino escaped unscathed, though, by striking out Dustin Pedroia with a 99 mph fastball that clipped the outside corner of the plate. The Sox tied it up in the seventh, though, as Severino was pulled after giving up a leadoff double to Xander Bogaerts and Mookie Betts delivered an RBI single off of Adam Warren (although the earned run was attributed to Severino). With runners on second and third, the Red Sox took a 6-5 lead on a wild pitch by Warren, although Austin Romine stopped a second run from scoring by beating Hanley Ramirez to the plate for the inning’s final out.


The Yankees couldn’t muster a rally in the eighth and ninth innings, as Matt Barnes and Craig Kimbrel shut them down to pick up the win and the save.


To make matters worse, the Yanks lost two players to injury--Starlin Castro left with an apparent hamstring injury in the sixth inning, and Jacoby Ellsbury was pulled in the eighth after sliding into the center field wall.