Yanks get back on track against the lowly Rays

By Unknown - September 20, 2016
The Yankees picked up a much needed 5-3 win tonight against their division foe, the Rays. Their recent skid included losing seven of their last eight and five straight, virtually ruining any chance of making the playoffs. Michael Pineda was very good on the mound tonight and the win moved New York to 3.5 games behind the Orioles. The win improved the Yankees record to 78-72, while the Rays fell to 64-95, second-worst in the AL. 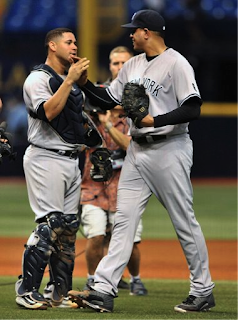 The Rays got on the board first, as Brad Miller continued his breakout season with a two-run triple in the bottom of the third inning. Mark Teixeira then responded with two-out, solo homer in the next half inning, making it a one run deficit. Brett Gardner tied up the game in the top of the seventh with an RBI single and Gary Sanchez added with a three-run homer later in the inning, his 17th of the season. The Rays tacked on another run in the eighth, as Logan Forsythe tripled off Tyler Clippard to lead off the inning and then scored on a wild pitch from Clippard.


Michael Pineda put in a very good start tonight, showing how filthy he can be at times. At one point, he had eight consecutive outs come via the strikeout. He ended up pitching 5.1 innings of work, allowing just two runs with 11 strikeouts. His 195 K’s on the season now rank sixth in the AL. Pineda’s counterpart Drew Smyly also pitched very good in this game, going six innings and allowing just one run on four hits. Smyly actually pitched just as good as Pineda tonight, but earned a no-decision thanks to the Rays’ lackluster offense and bullpen.


Brad Boxberger has been a very good reliever for the Rays in recent memory, but not tonight as he was torched for four runs in one inning of work. Boxberger’s poor outing pushed his record to 4-3, while Luis Severino picked up just his third win of the season, continuing his solid relief appearances for the Yanks in 2016. Betances shut things down in the ninth, ending the game with a 1-2-3 inning and picking up his 12th save of the season. Tyler Clippard allowed a run in his second straight outing, pushing his ERA with the Yanks to 1.29. Cy Young candidate Masahiro Tanaka (13-4, 2.97 ERA) will take the mound tomorrow night at 7:10 PM ET against Alex Cobb (1-0, 3.06 ERA), as he will try to continue his recent dominance.