A fan's take on the state of the Yankees

By Unknown - October 09, 2016
2016 was a year filled with some ups, but mostly downs for us Yankees fans. Just as Brian Cashman did his “State of the Yankees” address earlier this week, I will do my own version of where fans believe the Yankees are right now, and also how we got to this point. 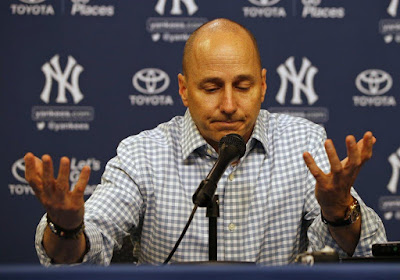 
This season started off with such hope and optimism for the team. Many fans, including myself, felt that the Yankees were one step away from reaching the postseason. But, that was not the case. There were many issues that plagued the team during the first half of the 2016 MLB season. The Yankees became a bore to watch due to their unproductive offense, and inability to stop a team from scoring. They were no longer the Yankees we had come to love, but instead a team bereft of young talent. In the second half of the season, the Yankees found a spark. The deadline trades, and subsequent youth movement that was infused into this team prompted the Yankees to be fun to watch again.

From a fan's standpoint, the dramatic shift that occurred from the start to the end of the season showed that the Yankees have made substantial progress moving forward. That being said, we cannot deny that there was a sense of being let down when the Yankees failed to seize a wild card spot, despite being as close as one game out. The months of August and September nonetheless established that the Yankees have somewhat changed their mentality to what teams like the Cubs have being doing for years.

2017 and beyond looks to be a promising time for all Yankee fans. We should expect to see more youth as the Yankees promote more prospects to the major league level. This is a positive sign for the Yankees as we seen this pervious season filled with players who are in the twilight of their careers.
The starting rotation this season was subpar, to say the least. There were glimmers of hope, but overall the only pitcher who consistently performed was our ace, Masahiro Tanaka. During the tail end of the season, there were signs of improvement that should build some optimism moving forward. Roster spots for the rotation will be up for grabs as many young pitchers will compete for a spot.

This season the offense struggled early on. Our greatest asset from that first half of the season was dealt at the deadline. Right now, Carlos Beltran is playing postseason baseball, something that he would not have achieved had he stayed in the Bronx. After the trade deadline, the Yankees were given another great asset, but he did not come via a trade, but rather from within. This player is Gary Sanchez, who unlike Beltran, has youth on his side. This, along with other notable prospects, caused the team to do something that was unimaginable before the trade deadline: compete for a playoff spot. If the current offense is given a full season to produce the way they had been doing in the final two months of 2016, the team will hopefully win more games and reach the playoffs.

Overall, the Yankees as a whole are in better shape than they were before the deadline. Key trades and notable call ups have allowed the Bombers to transform themselves into a team that will have their eyes set to preform each season in a high caliber fashion. As fans, we can do nothing more than wait and see what the future holds.