By Unknown - November 19, 2016
Even after two marquee midseason trades in which the New York Yankees shipped elite relievers Andrew Miller and Aroldis Chapman to the two eventual teams to compete in the World Series, the pinstripers' bullpen still ranked among the best in baseball in several pitching statistics come seasons end. After the aforementioned player’s departure from the Bronx, the ‘pen was led by the likes of Dellin Betances and Adam Warren, and finished the season with an American League-best .224 BAA (batting average against,) and second in strikeouts (578) and wins (36.) Unfortunately for Yankees fans, despite these impressive statistics, its bullpen was only able to muster a 3.67 ERA — the 16th best in the MLB (7th in the AL.) While the Yankees’ bullpen was perhaps its greatest strength through August, the bullpen imploded in several important September games — most noticeably by overworked closer Dellin Betances — which ultimately kept the Yankees out of the playoffs.

While Dellin Betances, Adam Warren, Tyler Clippard, Tommy Layne and Luis Severino appear to be locks in the bullpen heading into the 2017 season, the Yankees are just one elite arm away from having one of the best bullpens in baseball again. With the paucity of reliable starting pitching on the free agent market, the team could attempt to bolster its pen to compensate for their average starting rotation.

Let’s break down the top three relief arms on the market, and their likelihood of dawning pinstripes come April. 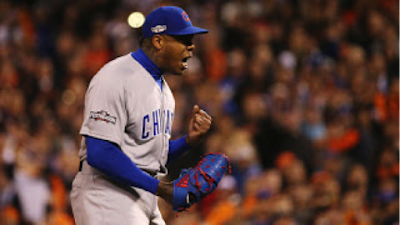 Already a fan favorite on the Bronx, the 2016 World Series champion could make his way back to New York for the 2017 season. While the 28-year-old lefty pitched to mixed results for the Chicago Cubs in the 2016 playoffs — most notably allowing a game typing home run off the bat of Rajai Davis in the 8th inning of game 7 of the World Series — Chapman was completely dominant in both leagues last season. After posting a 2.01 ERA in 31.1 innings for the Yankees in the first half of the season, the Cuban flamethrower dazzled national league hitters to a 1.01 ERA in 26.2 regular season innings. Between the two clubs, the LHP posted a 1.55 ERA (4th lowest in MLB, minimum 45 innings) to go along with 90 strikeouts (14K/9) and 36 saves. Chapman will look to approach double Jonathan Papelbon’s $50MM contract from 2012 — the most money ever given to a reliever. It’s also worth noting that a five year deal hasn’t been given to a reliever since the Blue Jays infamously signed LHP B.J. Ryan in 2005. Additionally, since Chapman was traded midseason, he is not attached to a qualifying offer — meaning the Yankees would not need to sacrifice its first round pick to sign him. Chapman has allowed just one home run to a left handed hitter (Luke Scott) in his 7 year career, which makes him an extremely appealing option to pitch in Yankee Stadium for years to come. Given these circumstances, I see the Yankees as the favorite to sign the fireballer, assuming they are comfortable with paying a reliever roughly $17MM - $20MM annually.

While Melancon can likely be had for considerably less than his aforementioned competitors on the market, teams should be cautious in signing a 31-year-old reliever to a long-term deal. That said, while the former-Yankee doesn’t possess nearly the same swing-and-miss stuff that Chapman and Jansen do, his results have been just as impressive as either over the past four seasons. In fact, Melancon has posted a lower ERA (1.79) than Chapman (1.93) or Jansen (2.22) over that time frame. Melancon led the MLB in saves (51) in 2015, and joined Jansen as part of the three-way-tie for 2nd most saves in the MLB (47) in 2016. Despite being a free agent older than 30, Melancon finished the most games (67) in the MLB this past season. To top it off, Melancon’s career 2.0 BB/9 (1.5 in 2016) is lower than Jansen’s 2.6 BB/9 (1.4 in 2016), and dramatically lower than Chapman’s 4.1 BB/9 (2.8 in 2016.) While these statistics could make could make the righty hurler a feasible alternative at a significantly lesser cost than Chapman or Jansen, the Yankees need to be cautious of signing a closer with below-average career strikeout numbers. Since becoming a full-time MLB pitcher in 2011, Melancon has never eclipsed a K/9 above 9.0. His 8.6 K/9 in 2016 was nowhere near Jansen’s impressive 13.6 K/9 or Chapman’s otherworldly 15.5 K/9. Melancon’s strikeout numbers will most likely dip with age, and especially if he moves to the A.L.. While he may not possess untouchable stuff, Melancon’s impressive ability to induce ground balls has allowed him to keep the ball in the park even better than Jansen throughout their careers, and nearly as well as Chapman. Since 2010, Chapman has led the pack with just 20 home runs allowed, whereas Melancon has given up 25 long balls and Jansen has given up 40.

While any of these three options would take the Yankees bullpen from being strong to elite, the Yankees need to decide how pressing of an issue bolstering their bullpen is in comparison to strengthening their starting rotation or line-up. If the team wants to spend on a free agent starter like Rich Hill or make a play on a free agent slugger like Yoenis Cespedes or Edwin Encarnacion, Melancon is undoubtedly the teams best option. However, if the team decides to improve upon those aspects of the team through trade-acquisitions, I believe that Chapman — while the most expensive — would be a better option than the signing the aging Melancon or sacrificing a first round draft pick by signing Jansen. My prediction is that the Yankees and Cubs engage in an all-out bidding war for Chapman, and the loser signs Melancon as a fantastic consolation.