By Unknown - November 18, 2016
The "Core Four"- Derek Jeter, Mariano Rivera, Andy Pettitte, and Jorge Posada- has commonly been referred to as baseball's portrayal of how teamwork and hard work equate to success. Fans who lived through the 2000s know how crucial each one of these four legends was to each season of success. Those five championship rings situated in the museum located inside Yankees Stadium are largely thanks to these men. 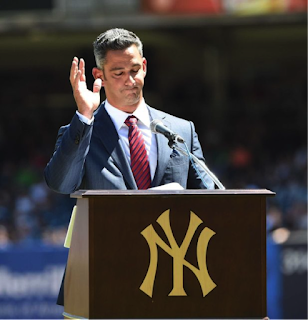 Photo Credit: Kathleen Malone-Van Dyke/ Newsday
Every year new players become eligible to forever be enshrined in Cooperstown. This year the first of the core four will become eligible: the beloved Jorge Posada. The catcher that a generation has seen behind the plate is officially ready for his first at bat against the committee. The questions he will need to face will be much harder than the others of the core four. As a catcher, his brilliant defensive play might not pop out as much as his friend Jeter, but you cannot negate his presence.  There are only a selected number of catchers in Cooperstown, the names of those chosen few are legendary. The most recent of them being Mike Piazza. Could Posada be up next?

A case can certainly be made for Posada to make it into the Hall of Fame. That being said, there are some who believe that Posada should not be enshrined in such a prestigious part of baseball lore. Just as with any debate, we will first need to familiarize ourselves with the facts before jumping to a conclusion.

First off, Posada was a respected team leader. He was never one to sit down and listen. Even if someone did not agree with him, they had the utmost respect for his competitive nature. The leadership qualities he brought to the table are indicative of his overall character.

Moreover, Posada hit .273 throughout his 17 years in the majors. His average, however, does not account for the importance of his hits. Posada developed a reputation for coming through in the clutch. He also consistently finished amongst the team's leaders in home runs. Posada was more than a catcher. Sometimes the stats do not show how important some of his hits were.

Lets not forget that Posada received other distinctions to go along with his five championships. He won five Silver Slugger awards in addition to his five All Star appearances. It's also worth noting that he was very much involved in the MVP discussion for the 2003 and 2007 seasons. All of his ex-teammates will agree on the respect they had for Posada and the fierce competitiveness that he brought to the table. According to his former manager Joe Torre, “The only thing I try to do with Jorge is just to remind him that it doesn’t have to be 110% all the time.”

Posada also had the opportunity to call David Wells' historic perfect game. Many catchers dream of the chance to be part of something great, but for Posada that was just another day in the office.

Jorge Posada has seen and been through it all. He has seen the best and worst of the team, and put together a career that might not stand out as much as the other members of the core four. If you take a deeper look, you will realize that Jorge Posada is more than ready to become the first of the core four, and the 18th ever catcher, to be enshrined in Cooperstown, New York.