By Unknown - November 17, 2016
The Yankees made their first significant move of the offseason this Thursday as they traded catcher Brian McCann to the Houston Astros for pitching prospects Albert Abreu and Jorge Guzman. Ever since the emergence of Gary Sanchez in the second half of last season, the writing has been on the wall for McCann. Few expected him to be on the Yankees roster come 2017. While McCann became a respected clubhouse leader, there was simply no room for him on this team moving forward. It's great to see the Yankees have confidence in Sanchez moving forward. This trade also signifies a continuance of stockpiling young talent for the Bombers. The Yankees are still looking to compete come 2017, but they're doing so while keep their eyes on the brighter pastures ahead. 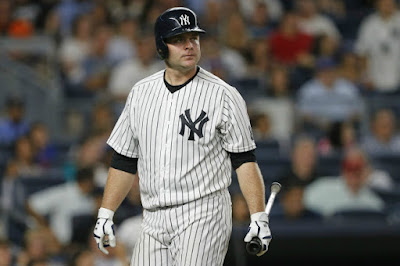 
McCann has been quite the letdown since arriving in the Bronx three years ago. His power numbers were certainly helped by the short porch in right field; however, it was also detrimental to his overall production. McCann's inability, or lack of an effort, to adjust to defensive shifts caused his average to suffer. During his three seasons in the Bronx, he could not even bring his average over the .250 mark of respectability. Don't get me wrong, McCann provided us with some clutch moments. I'll forever be appreciative of his walk off home runs. I'm specifically referencing his three-run extra inning shot on the Fourth of July in 2014. Unfortunately, I made the mistake of leaving the ballpark early that night so I missed the moment. That being said, this trade is good for all parties involved.

The Astros are gaining a guy who is still arguably one of the better catchers in the game. He's shown an ability to lead a pitching staff, and call a great game. He should also hit about 20 home runs next season. His power numbers may go down after leaving the friendly confines of Yankee Stadium, but it shouldn't be that significant of a drop off. The Yankees are able to part ways with someone who likely would have served as a back up catcher/part time DH next season anyway. This would have been an awkward situation for the Yankees and McCann a like. The Yankees committed to paying $11 million of McCann's remaining salary over the next two years so parting ways with their overpaid catcher wasn't necessarily an easy pill to swallow, from a monetary perspective. On the bright side, this move frees up some money for the Yankees to spend in free agency. Knowing our frugal owners, they will likely opt to keep the money in an attempt to get under the luxury tax threshold.

Abreu and Guzman will both be 21 years of age come the start of the 2017 baseball season. The two pitchers have the potential to be steals for the Bombers. MLB.com recently rated Abreu as the Astros' number seven prospect. Splitting time between Single-A and AA, Abreu had a 3.72 ERA in 24 appearances, 16 of which were starts. Guzman was limited to 40 innings of rookie ball last season, but the signs are rather encouraging. From my basic preliminary research on these two, I don't see anything not to like. This was a trade the Yankees HAD to make, and they ended up getting back two arms with great potential.

Perhaps the most encouraging sign of this trade is the confidence the Yankees organization has in Sanchez moving forward. Though he did not win Rookie of the Year, he made an impressive case during the last few months of the 2016 season. Almost singlehandedly carrying the Yankees to relevance in August and September, Sanchez took the league by storm, both offensively and defensively. While we cannot realistically expect him to replicate his impressive 2016 run, he certainly looks to be an above average talent who can be a fixture in the middle of the Yankees lineup for years to come. Resigning Carlos Beltran also becomes an increasingly likely possibility after this move. With McCann gone, the Yankees now have space for a full time DH. Since Beltran is no longer capable of consistently playing the field, he could slide in well to the DH role. He's still capable with the bat, and has proven he can handle the spotlight of New York.

Hopefully this move marks what should be a busy offseason for the Bombers. General Manager Brian Cashman has plenty of work to do. Whether it be bringing back Aroldis Chapman, acquiring starting pitching, or dealing more players (Brett Gardner specifically), many moves remain to be made. Furthermore, I'd like to take another moment to thank Mr. McCann for his time in New York. I've been one of his biggest critics at the BBB, but he came through on a number of occasions for the team. He carried himself with nothing but class during his time in pinstripes. I wish him nothing but luck in Houston, unless he's playing the Yankees, of course!