By Chad Raines - December 23, 2016
After a paradigm shift in 2016 the likes that most of us have never seen in our lifetimes, the
New York Yankees enter the 2017 MLB season with a brand new look, a brand new philosophy,
and a significant buzz that fans like myself haven't felt in years.

For years, the Yankees have been the big-market, deep-pocketed juggernaut that former
bossman George Steinbrenner III lived by. If there was a top free agent that filled a need, there
was no price too great to get him in pinstripes. However, that all changed last season starting
on July 25th after two consecutive losses to the last-place Tampa Bay Rays seemingly doomed
any remaining playoff chances the Yankees had.

For the first time in my lifetime, the Yankees became trade deadline sellers and shipped closer
Aroldis Chapman to the Chicago Cubs for a package that was headlined by 2016 Arizona Fall
League Most Valuable Player Gleyber Torres. The trade also brought back Adam Warren to the
Bronx.

The trend continued on July 31st as the Yankees shipped Andrew Miller to Cleveland for top OF
prospect Clint Frazier and pitchers Justus Sheffield, Ben Heller and JP Feyereisen. Then, on
deadline day, the Yankees sent Carlos Beltran to Texas for pitching prospect Dillon Tate. The
purge continued on August 12th when Alex Rodriguez played his final game in pinstripes and
the Yankees recalled prospects Aaron Judge and Tyler Austin the next day.

Then finally, on November 12th, New York sent catcher Brian McCann to Houston, eating only a
small portion of the remaining money owed to him. The youth movement was officially on and
the high-priced free agents of yesteryear have begun being taken off the books.

Courtesy of Spotrac, let's take a look at the current Yankees payroll situation: 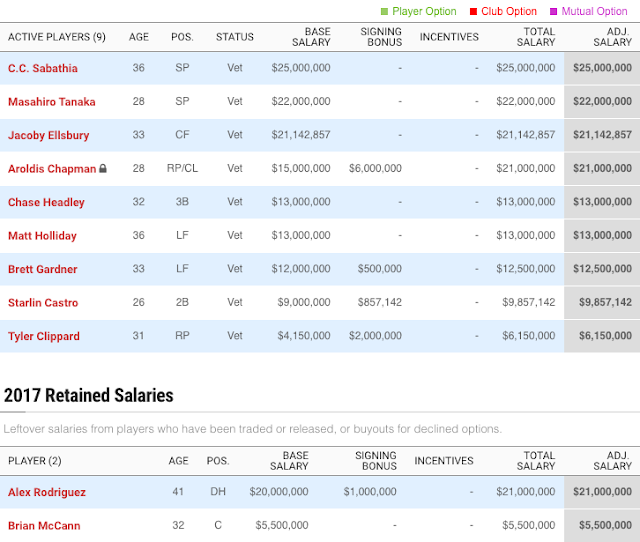 Arbitration eligible players:
Players under team control on league minimum deals:
Not all players under team control will crack the 2017 Opening Day roster (Heller, Holder, Refsnyder, Austin, Bleier, Cessa, or Green could be expected to start the season at Scranton/Wilkes-Barre). So the Yankees appear to have roughly 2-4 roster spots for Cashman to work with this Winter via trades and free agency, and he did just that already signing Matt Holliday to a one-year deal, and Aroldis Chapman to a multi-year contract.

Including the nine players currently signed to deals, plus the dead money owed to Rodriguez and McCann, the Yankees' current 2017 payroll commitment stands at $170,149,999.

After adding in players like Sanchez, Aaron Judge, Greg Bird & Ronald Torreyes who will play out 2017 at (or close to) league minimum of $535,000 and significant raises owed to Didi Gregorius, Dellin Betances and possibly Michael Pineda, it's not unrealistic to factor in another $30-35 million to the payroll for 2017. That would get the Yankees to rough $200,000,000 - and likely a little over that mark - plus whatever else is added this winter in free agency, which may be absolutely nothing. That part is still to be determined, but it appears the Yankees will be just over the luxury tax threshold which is set at $195,000,000.

What is more interesting to me is what happens at the end of 2017.
Players who will be eligible for free agency after this upcoming season include:
Additionally, Alex Rodriguez's contract will finally be fulfilled which frees up an additional $21 million. The Yankees will also see Matt Holliday's $13 million come off the books. Following the season after that, the Yankees will see McCann, Chase Headley, and Brett Gardner all come off the books.
All said and done, that could be as much as an astounding $90 million coming off the books next offseason and an additional $30 million after 2018 available to spend on a solid 2017-18 Free Agent class, and a historically deep 2018-2019 class.

It is well documented that the Yankees will be in hot pursuit of top FAs Bryce Harper and Manny Machado following the 2018 season, and the Yankees just might have the cash to make all their wildest dreams come true similar to the spending bonanza in the winter of 2008-09 that ultimately brought the World Series back to the Bronx. However, what makes the 2018 offseason more intriguing is that unlike years past where the Yankees would sign top free agents at, near or already past their 30th birthdays, guys like Harper and Machado will hit free agency at a much younger age (26) by virtue of them making their Major League debuts as teenagers.
The Yankees will be flush with cash and ready to spend money on guys at the peak of their prime years, ready to complement the pool of youth talent they've assembled via last year's trades and recent drafts. Even more interesting, is they might be able to accomplish all of this while still remaining under the inflated luxury tax threshold, courtesy of the freshly agreed-upon Collective Bargaining Agreement.

Strap in, y'all. Things are about to get wild. And I, for one, could not be more excited.