MLB swings and misses by stripping All-Star Game of importance

By Nick Scott - December 03, 2016
The long awaited MLB CBA has finally been agreed upon and it seems the MLB offseason should become quite busy in the near future.

However, the CBA itself is an interesting point of discussion. Qualifying offers won't necessarily cost first round draft picks, rosters will not expand to 26 players, the international draft has been squashed, and the luxury tax threshold will increase to $210 million in five years.

Another noteworthy piece is the fact that the All-Star Game will no longer determine home field advantage for the World Series. 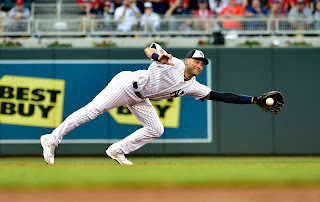 For whatever reason, this is a topic baseball fans seem to have a very strong opinion on no matter which side they fall on. You either love(d) the midsummer classic determining home field advantage or hate(d) it.

Well, now the side that held disdain for it being responsible for home field can rejoice, as it will do so no more.

I've always been perplexed by how people could be so staunchly against the All-Star Game rewarding home field to the victorious league. It incentivized players both attend and play hard.

Look at all star games in other sports. The NHL and NFL have particularly horrendous ones. Players hot dog it all game long and it's hard to call it any kind of competition. The result is a rather dull and dis-interesting product not worth watching.

The MLB All-Star game was different. Home field advantage was an incentive worth playing for and there was typically a genuine effort seen as a result.

Now, I have no idea why an MLB All-Star would even think about trying their hardest in the mid summer classic. Why risk exerting yourself and potentially injuring yourself for a game that means absolutely nothing?

In fact, why even show up? We saw Derek Jeter decline invitation in 2011 and we will probably see a whole lot more of that going forward. Star players might as well use the break as a vacation time to get away from baseball and recover a bit instead of showing up to a meaningless exhibition game. Quite frankly, I won't blame them if they do so. 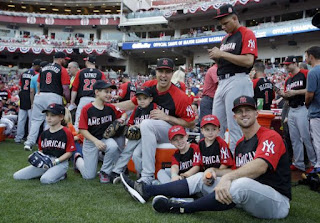 Via Newsday
And it's not like we even see the most deserving players in the All-Star game anyways. The All-Star vote is nothing more than a glorified popularity contest with the fans determining the rosters as we've seen the Kansas City Royals and Chicago Cubs have almost had their entire team voted in the past few years when they clearly didn't belong there. It might not be a CBA issue, but if a change was to be made to the All-Star Game, it should've been to eliminate the fan vote.

Now we get to see players who aren't necessarily All-Stars go (understandably) mess around in a meaningless exhibition game. Sounds great.

If the MLB is going to take away the only incentive for players to try hard, it might as well quash the All-Star game altogether.

And that's fine. I understand it if the players want some time off to relax away from the game, but don't give us a meaningless game and attach the words 'All-Star' to it.

In the end however, those against it determining home field get the last laugh, as the mid summer classic will no longer have this honor.