2016 was a bit of a train wreck for the righty, however, as he was held to just five innings pitched due to injury.

Injury is quite obviously the determining factor here in San Diego's decision to decline to tender Ross a contract. In October, Ross underwent surgery for thoracic outlet syndrome and is expected to miss 4-6 months as a result. San Diego likely didn't feel comfortable paying for a player who could miss parts of the season while they try and recover from their colossal failure when they built an on-paper super-team a few years back. 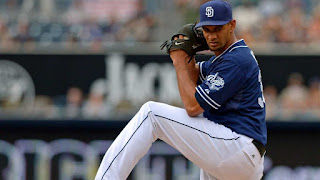 Via FoxSports.com
While Ross could miss the beginning of the season, he's the perfect free agent for the Yankees. He's a proven ace-caliber pitcher who's not yet 30, something the Yankees should be dying to add to the rotation.

The alternatives on the free agent market aren't great at all. We've already covered why Rich Hill is a disaster waiting for whatever team signs him and after that there's really only reclamation projects such as Derek Holland.

Obviously the injury bug this year is a bit concerning, but Ross really hasn't had a history of nagging injuries.

This should be something the Yankees hop all over. Being able to acquire a stud pitcher for nothing but cash is something right in the Yankee wheel house.

If the team could sign Ross, it could hold on to the prospects that would otherwise likely be traded for a starter this offseason. That's a win-win to be able to get the starter the Yankees need and keep the farm system intact.

I have no idea what Ross would demand contract-wise, but the baseball gods have made this crazy opportunity for the Yankees and they should do what it takes to get it done.