By Unknown - December 08, 2016
Yankees fans can finally exhale. On Wednesday night, the Yankees made closer Aroldis Chapman the richest reliever in baseball history. The Yankees and Chapman agreed to a five-year, $86 million dollar contract, easily topping previous contracts given to relievers. In a move that had seemed inevitable to some within the industry, the Yankees showed that they still have the financial resources to make a big deal happen. While the Yankees have shied away from handing out big contracts the last few off seasons, the re-addition of Chapman addresses a major need for the team. The elite reliever will resume where he left off prior to being traded to the Cubs around last year's trade deadline in a deal centered around top-prospect Gleyber Torres. During his appearances at Yankee Stadium last season, Chapman often dazzled the crowd with his ability to consistently top 100 MPH. The Yankees may be a few years away from competing for a championship, but one thing is for sure. Assuming he stays healthy for the duration of his deal, Chapman will be a central part of any championship hopes the Yankees have in the upcoming years. 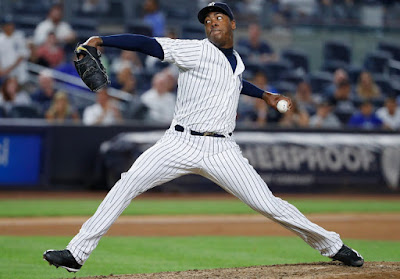 
In a recent piece, I predicted that the Yankees would lay low this offseason, as they have done since 2013. I did so, however, while making a notable exception for Chapman. Throughout the course of this offseason, the Yankees have made no secret of their desire for a reunion with the Cuban fireballer. Chapman's representatives made it clear that the feeling was mutual. Heading into the Winter Meetings, the only impediment to this reunion was money. Over the years, money has been nothing more than an afterthought for the Bombers. The organization's newfound frugality made me worry about the prospects of a Chapman deal coming to fruition. Fortunately, ownership gave General Manager Brian Cashman the permission to spend big for Chapman.

As of yesterday, the Yankees extended offers to both Chapman and former-Dodgers closer Kenley Jansen. The Yankees clearly had a preference for Chapman; however, they likely figured it was smart to have a contingency plan, just in case negotiations with Chapman went south. In Chapman, the Yankees are bringing back a guy who has proven he can win. Perhaps most importantly, he's shown he can pitch in New York. Not every player can handle the Big Apple. Many players, in all sports, have come to the greatest city in the world and choked. Last year, Chapman proved to the Yankees front office that he was not one of those guys. In his 31 games as a Yankee, Chapman had 20 saves and a 2.01 ERA. Chapman is a very marketable commodity. The Yankees are all about their bottom line. This is no secret. With a current roster bereft of star power, Chapman is the perfect solution. He should help drive ticket sales.

Heading into the 2016 season, the Yankees had arguably assembled the best back end of the bullpen in baseball history. "No Run DMC," as they came to be called, consisted of Chapman, Andrew Miller, and Dellin Betances. After Miller and Chapman were dealt at the trade deadline, Betances assumed the closer role. While Betances is a special talent, he doesn't appear to be closer material. On certain occasions, he can come into a game and quickly dominate an opposing lineup. On the other hand, there are many where he struggles profoundly. While this is the case for many pitchers, Betances has an alarming tendency of losing the strike zone. This is partially because of the breaking ball he relies on for his dominance. Chapman is much better suited for the ninth-inning role. Betances has succeeded in a set-up role, and this is where he will return for 2017. Along with Betances and Chapman, the Yankees also have Tyler Clippard and Adam Warren, both of whom have had success as relievers. These four pitchers alone constitute an effective back end of the bullpen. The rest of the relief core will likely consist of the losers from the starting pitching competition and maybe a few low-risk, high-reward type signings.

After initially acquiring Chapman from the Cincinnati Reds last offseason, the Yankees received a lot of criticism from outside groups due to allegations of domestic abuse levied against the fireballer. While the accusations were disturbing, Chapman has already been punished, serving a 30-game suspension last season for a crime he was never even charged with. That being said, this move is great for the New York Yankees. Chapman helped lead the Chicago Cubs to a championship last season. It's almost certain that he's thirsty for more winning. The Yankees may not be in a position to win a title for the next year or so, but when they are Chapman will be a necessary component. For the next few years, he'll provide the fans with a product worth seeing. Barring the unlikely addition of another superstar, Chapman is the most recognizable name on the Yankees roster. He's one of the main reasons people will show up to the ballpark next season. Bringing back Aroldis Chapman was a move the Yankees needed to make, and I'm happy to see the organization took action to ensure the contract's completion.