By Unknown - December 31, 2016
It was certainly an up and down year for the New York Yankees. Stars left in both the form of trades and retirement, while the youth movement finally saw its beginning. I have the privilege of putting together this piece for the second year in a row, but all of the writers here at the BBB had input in this piece. Without further ado, here are the BBB's top choices for the top moments of the Yankees 2016 season.

11) A-Rod’s final game
While it wasn’t the most orthodox way of retiring, Alex Rodriguez concluded his controversial career in the most A-Rod way possible. It was a cloudy, dark, rainy evening in the Bronx when the Yankees held a pregame ceremony on the field, that was, well, awkward. Despite the somewhat ironic weather conditions, Rodriguez smacked a RBI double and when he reached second base, he shouted in excitement and clapped his hands. For me, and probably most Yankees fans, this was a moment of accepting A-Rod for he was; an undeniable talent with so many other troubles. While that would be the only hit of the night for the slugger, he delighted fans when he took the field at his old position of third base. It was a nostalgic moment for many. It was a fitting end to what A-Rod’s career was; polarizing. 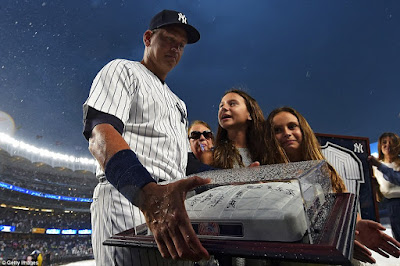 
10) Castro, Gregorius both hit 20 home runs
While this wasn’t a single moment, it is worthy of being on this list. Starlin Castro finished with 21 home runs, while Didi Gregorius ended the year with 20, career highs for both. This is significant because the pair became the first middle infield duo in Yankees history to ever both hit 20 home runs a piece. It was a fantastic season for Gregorius, who experienced a breakout while becoming one of the team’s most consistent hitters. It was nice to see that the Yankees put together a strong double play pairing after years of mediocrity from the second base position. While there are lots of prospects who will eventually push at the pair’s playing time, it’s reassuring to know that both Castro and Gregorius are both young and productive.

9) The short, but amazing period of “No Runs DMC”
Man, was it fun to watch the trio of Aroldis Chapman, Dellin Betances, and Andrew Miller. The game’s best bullpen was the team’s biggest weapon throughout the first half of the season. Miller had a 1.39 ERA at the time of the trade, while Chapman was at a 2.01 ERA, and Betances his usual filthy-self. While the ERA numbers were incredible, it was the strikeout capability of the trio that was unheard of. All three averaged more than 10 strikeouts per nine innings. Miller and Betances were capable of firing fastballs, but also unleashing deadly offspeed sliders and knuckle curves. As we all know, Chapman was and still is, the fireballer, and Yankees fans should be happy he’s a Yankee again! 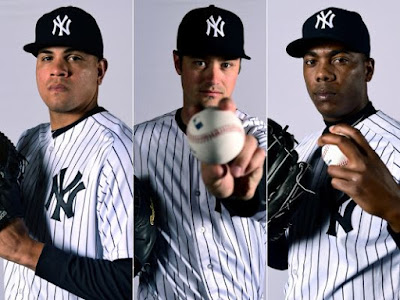 
8) Success at the trade deadline
A day before the August 1st trade deadline, the Yankees sat at an even 52-52 record. Thankfully, ownership gave the green light to sell. And boy, did they sell. The Yankees undeniably came out of the trade deadline as the biggest winners. Andrew Miller, Aroldis Chapman, Carlos Beltran, and Ivan Nova were all shipped out for incredible hauls. GM Brian Cashman turned these four players into five top 100 prospects and more, giving the Yankees the best farm system in the process. By acquiring Clint Frazier, Gleyber Torres, and Justus Sheffield, the Yankees gained probable future cornerstones. Making the decision to sell was a tough one, but one that should ultimately lead to lots of future success. 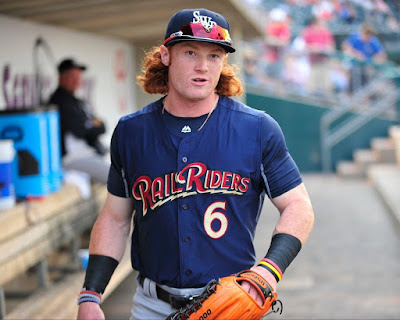 
7) Comeback win against the Texas Rangers
Consider this; the Yankees came into the bottom of the ninth inning down by a score of 7-3. For most ballgames, it would be safe to say this one was over before the Yankees even got their last licks. However, this was not your average ballgame. In the ninth, Rob Refsnyder singled and Jacoby Ellsbury walked. Brett Gardner then singled in Refsnyder, bringing the score to 7-4. Then, Brian McCann (who had hit a solo shot in the eighth), smashed a 3-run homer to tie up the game. Something was most definitely in the works. Starlin Castro walked, bringing Didi Gregorius up to the plate. As fate would have it, Gregorius snatched victory from the Rangers as he hit the game-sealing, walk-off home run. For the fans at the game and the fans at home, this victory showcased the team’s undeniable spirit even in the midst of a down year.

6) Brett Gardner’s game-ending catch
It was yet another back and forth battle between the Yankees and the Toronto Blue Jays. New York was up 7-6 at the top of the ninth when Toronto slugger Justin Smoak came to the plate with the bases loaded. It was the perfect recipe for a heartbreaking loss. Smoak drilled the ball to left field, and it appeared it had a chance to find the seats. However, Brett Gardner made sure it didn’t happen, as he made an incredible leaping grab to snatch the ball from the air and secure the Yankees win. It was a dramatic and exhilarating moment for the Yankees and the fans. It symbolized Brett Gardner’s sometimes underrated importance to the team.

5) Mark Teixeira’s walk-off grand slam
It was your classic hero scenario. The Yankees were down by two runs with the bases loaded against the Red Sox when Teix came to the plate. The Yankees were just one out away from being eliminated from playoff contention. Instead of walking, or just hitting a single, Teix did the impossible and smashed a walk-off grand slam to give the Yankees the win. It was much more than just a victory on the field, but more a victory for Teixeira himself. It was a year to forget for Teixeira, who would go on to retire at season's end. The slugger wasn’t producing much, but he gave himself, and the fanbase, something to remember when he went out with a bang.

4) Andrew Miller strikes out David Ortiz and Hanley Ramirez to cap off victory
The New York Yankees came into this game with an abysmal record of 8-17 and desperate for a win, especially against a division rival. The Boston Red Sox made this game interesting loading the bases with one out, as the Yankees were up 3-2 in the top of the ninth. After falling behind in the count 3-1, then-Yankee Andrew Miller threw two pitches that punched Ortiz out. The controversial called third strike was a slider that appeared to be out of the zone, as catcher Brian McCann was crossed up. Ortiz promptly went nuts, screaming in the face of home plate umpire Ron Kulpa. He was ejected after running back out onto the field and cursing more in the dugout. Following the strikeout of Ortiz, Miller sealed the W for the Yankees as he struck out Hanley Ramirez looking.

3) Aaron Judge: Two homers in two days
It’s pretty tough to live up to an MLB debut where you connect on a home run for your first MLB hit, but that’s exactly what Aaron Judge did. The day after smashing his first home run, he did the impossible. He connected on a round-tripper that just barely made it over the short right field porch at the stadium, very similar to Austin’s the day before. While Judge would go on to disappoint for the most part of the remainder of the season, his two-day show of home runs was surely an exciting time for Yankees fans and the front office.

2) Aaron Judge, Tyler Austin go back-to-back for first MLB hits
After the trade deadline, there wasn’t too much to be excited about as Yankees fans, as all the prospects the team got were far away from their debuts. However, highly-touted prospect Aaron Judge and the determined Tyler Austin made their debuts on August 13th, one they wouldn’t forget. Austin, known for his opposite-field power, promptly hit an opposite-field home run for his first ever major league hit. Directly after him, Aaron Judge absolutely crushed a fastball to the deepest part of Yankee Stadium’s center field. It was truly an amazing and unforgettable moment for the Yankees fanbase, as it was the symbol of youth and its limitless potential. Here's a video of the action. 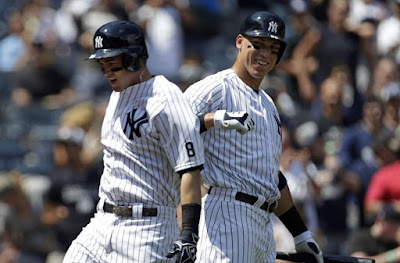 
1) Gary Sanchez’s rapid ascent to stardom
Yankees fans, you now have a new face of the franchise. Yes, in just two short months, Gary Sanchez has become the new superstar of the New York Yankees. What he did after his call-up was nothing short of incredible. The 24-year-old finished with a .299 average, 20 home runs in 34 games, and all while displaying a cannon of an arm. It came to a point that Yankees fans felt disappointed when he didn’t hit a homerun. Sanchez was so good that he literally ended Brian McCann’s time in the Bronx, as he was shipped out in the offseason. Of all the promising youngsters the Yankees have, Sanchez looks to be the cornerstone of the youthful new Yankees. Here's a video of all his home runs.