By Unknown - December 26, 2016
In case you're unaware, manager Joe Girardi is entering the final season of his contract. Having managed the team since 2008, Girardi has seen his share of ups and downs with the Bombers. The Yankees have given Girardi a fairly long leash. Considering the Yankees have missed the playoffs more times than the've made it under Girardi, he should be on the hot seat. Granted, Girardi hasn't exactly been handed the best rosters as of late, but this is still New York. I've been one of Girardi's strongest critics here at the BBB over the last few years, so I felt it would be timely for me to chime in on his future heading into the 2017 season. For some reason, the Steinbrenners and GM Brian Cashman really like Joe Girardi. It will be very hard for the Front Office to continue defending a guy who has not won a playoff game since 2012. Girardi's future will largely hinge on the 2017 season. If we go yet another October with no baseball in the Bronx, the Yankees may be forced to make a managerial change, regardless of how favorably those with the power view Mr. Girardi. 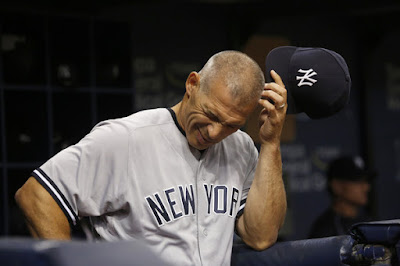 Photo Credit: Brian Blanco/Getty Images
From what I can gather, Yankees fans are pretty split over their views on Girardi. Some love him. Some hate him. I align more with the latter category. Girardi has displayed his incompetence on numerous occasions. Whether it be his inability to competently manage a bullpen, tendency to bench players when they're hot, or even his botched handling of the A-Rod debacle last season, Girardi's shortcomings have been pronounced. I've consistently blamed both Cashman and Girardi for the Yankees recent struggles. As a team in transition, the Bombers have been tasked with a rather difficult dilemma. Competing and rebuilding don't necessarily go hand in hand, although the Yankees have done the best they can to reconcile the two. My problems with Girardi date back quite a few years.

After Girardi took over the team in 2008, the Yankees missed the playoffs for the first time since 1994. In 2009, following the addition of CC Sabathia, AJ Burnett, and Mark Teixeira, the Yankees won their first championship since 2000. Since then, however, Girardi has been a failure in the Bronx. The 2010, 2011, and 2012 teams were championship caliber. The Yankees failed to capitalize in years that a feasible path to the World Series existed. Ever since Derek Jeter's infamous ankle injury in Game 1 of the 2012 ALCS against the Detroit Tigers, the Yankees have had trouble winning when it counts. Let me phrase that a different way. The New York Yankees have not won a playoff game in over four years. That is unacceptable, regardless of how you look at it.

Many fans have simply given Girardi a pass for the mediocrity of the last few seasons. Again, I understand that he hasn't had a championship-caliber roster since 2012, but his numerous in-game blunders are unexplainable. 2015 was perhaps his worst year at the helm. The Yankees blew a 7-game division lead after the trade deadline, settling for a wild card spot instead. They subsequently were shut out in the one-game playoff by the Houston Astros in the Bronx. Did the team likely overachieve in the first half? Probably. Girardi's horrendous in-game decisions lost the Yankees a significant amount of games (at least 10-12 in my estimation). I covered his poor decisions in great detail throughout the course of the 2015 season so for the sake of this piece I will not relitigate past arguments. I will say, however, that his shortcomings carried over into 2016.

My purpose in writing this piece is to assess Girardi's future in the Bronx. Even the most devout Girardi apologists must admit that change might be necessary moving into 2018. Girardi has seen a lot in his soon to be 10 years as Yankees manager. It might just be time for a new voice. He took us to the promise land once, but that was a very long time ago with a very good roster. It didn't appear that it required much managing on his part. Time and again, Girardi has displayed his incompetence. Mr. Girardi must answer for the absolutely mind-boggling in-game moves he has made over the years.

Girardi's biggest strength is his ability to handle the pressure of managing in New York, and connecting with his players. While these are important attributes in a manager, they do not compensate for his in-game decision-making. Regardless of what one may think of Girardi, it is fair to say that this year will be a clear referendum on the Yankees manager. If the Yankees fail to secure even a wild card berth, it will be hard to explain his contract renewal to a fan base tired of losing. Sometimes a manager has simply run his course. One needs to look no further than the New York Football Giants. I continue to have the utmost respect for Tom Coughlin, but his time ran its course after last season. While I would never compare Girardi to Coughlin, and to do so would be an insult to the former-Giants head coach, the situations are quite similar. Girardi has had some great moments in the Bronx, but as of late, his performance has not been up to par.

The Yankees current roster heading into 2017, though still a team in transition, is certainly capable of securing a playoff berth. If Girardi is able to bring the Yankees back to the playoffs, and by playoffs I mean an actual postseason series, not simply a one and done wild card game, then he will have proven that he should lead the new era of Yankees stars moving forward. But, if he cannot, it is time for the Yankees to go in another direction. Girardi must make adjustments this season. If a player is hot, continue to play that player until they cool off. The binder is not always right when it comes to bullpen decisions. If a pitcher is pitching well, keep him in the game. I personally believe these two adjustments would go a long way in improving Girardi's overall performance as a manager. That being said, I'm not too optimistic in this regard. If the Yankees fail to make the playoffs for the sixth time in Girardi's 10 years as manager, making the decision to bring him back will be one that forces me to permanently lose faith in the organization's dedication to winning.