Give Dellin his money!

By Unknown - January 21, 2017
For the first time since 2008, the New York Yankees will be heading to salary arbitration with one of their players. The Bombers have been unable to come to an agreement with Dellin Betances, one of the most dominant relievers in the league for the last three seasons, on his 2017 salary. The Yankees offered Betances $3 million, but the right hander hasn't budged from his $5 million demand. Regardless of the outcome here, Betances will be due for a drastic raise from the $507,500 league minimum he earned last season. First and foremost, we must acknowledge that Betances has been, and will continue to be, an integral part of the Yankees bullpen. Betances has earned his money, so give it to him! Since when have the Yankees been so frugal over a mere $2 million? By going to arbitration, the organization has chosen to put itself through an unnecessary dispute with one of its best players, with the potential to damage the relationship between the two parties. 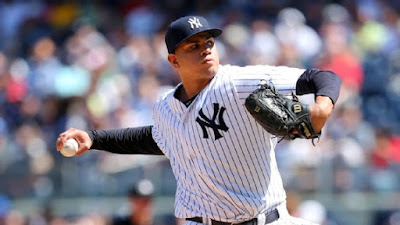 Baseball is a business. Every reasonable person understands this. Like any business, employees will seek to make the most money possible. If anyone reading this piece had the opportunity to earn more money than they were being offered, they would jump on it, especially if they believed they were worth more to the company than the original offer implied. Betances's case is no different. It will be quite difficult for the Yankees to argue that Betances is not worth $5 million per year. In fact, it would be easier to argue that he's being underpaid.

Many fans will contend that Betances is being selfish for not simply settling with the Yankees. This argument goes both ways. The ball is in the Yankees court. They are one of the richest franchises in professional sports. In the grand scheme of things, $2 million is chump change to the New York Yankees. I'm finding it difficult to explain what the organization's rationale is for not giving Betances the extra money. Is it fear of setting a dangerous precedent? Do they not want other players to think they can extract the same concessions by simply demanding more money? This explanation makes a lot of sense. For an average player, I would side with the Yankees on this one. Betances, on the other hand, has shown that he's an elite reliever. You can't blame him for wanting to be paid like one.

In 225 games over the past five seasons (three full seasons, but he made a handful of appearances ins 2011 and 2013), Betances has been one of the best relievers in baseball. He has a 14-10 record with a 2.16 ERA. The right hander has 404 strikeouts in 254.2 innings. Those numbers are more than impressive. They're scary good. Betances has done this while being shuffled around in the bullpen. He's pitched middle relief, the seventh inning, eighth inning, and he even closed last year after the Yankees traded Andrew Miller and Aroldis Chapman around the trade deadline. He's been Joe Girardi's go-to guy. Some, including myself, would argue that manager Joe Girardi has overused him. It will never cease to amaze me when Girardi brings Betances into a five-run game. This can sometimes be attributed to a lack of reliable relievers, but it also attests to the trust the manager has in this particular reliever.

Betances will play a key role in 2017 for the Yankees. Resigning Chapman was huge for the Bombers. One of Betances's few low points in the Bronx have been his struggles as a closer. For some reason, he just pitches better in a set up role. Bringing Chapman back provides the Bombers with an elite closer. It also allows Betances to go back to where he feels comfortable. Along with Tyler Clippard, Adam Warren, and a few other relievers, Betances and Chapman will hope to lock up many Yankees victories. Prolonging a dispute with one of their stud relievers makes no sense, regardless of how you look at it.

Over the past few seasons, Dellin Betances has become a fixture in the Bronx. Betances will not be a free agent until after the 2019 season so the Yankees don't have to fear losing him soon, but the upcoming arbitration may strain the relationship between the two parties. It is in everyone's best interest that Betances be in a position to do well. Don't get me wrong, $2 million is a lot of money to us common folk, but not to the Yankees. The organization can very easily resolve this dispute by giving Betances the raise he has deserved. He has been a professional both on and off the field, and it's about time the Yankees reward this homegrown star. Allowing this dispute to go to arbitration is a mistake. Betances, given his track record and the going rate for star relievers in the current market, will likely emerge victorious. Hopefully, he can move past this experience and be ready for open day 2017.