By Unknown - January 01, 2017
As the Yankees gear up for the 2017 season, it appears that Brian Cashman is done making his offseason additions. Granted, Cashman may have some minor moves up his sleeves, but all signs seem to indicate that the team is pretty much content with what they have moving forward. As of now, the Yankees have two open spots in the starting rotation. 22-year old right hander Luis Severino will be given every chance to win one of these spots so he can establish himself as a viable major league starting pitcher. After struggling immensely as a starter in 2016, Severino found a niche for himself out of the bullpen. At this point, the Yankees still view Severino as a starter. I, personally, am a bit conflicted. Though Severino performed more than capably during his rookie campaign in 2015 out of the rotation, he was not the same pitcher in 2016. As soon as the Yankees "demoted" Severino to the bullpen, it appeared that something clicked. The Yankees should be patient with Severino. That said, if Severino cannot succeed as a starter in 2017, the Bombers may have to come to the realization that his future is in the bullpen. 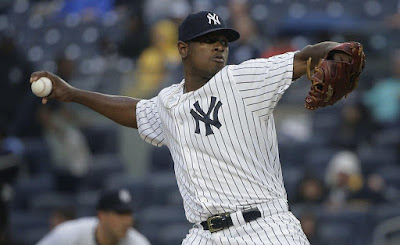 The Yankees will enter spring training with several major story lines. Luis Severino's spot on the roster is one that immediately stands out. It is no secret that the Yankees starting rotation is the major weak point on the roster. As of now, Masahiro Tanaka is the only reliable starting pitcher the Yankees have. CC Sabathia put up fairly decent numbers last season, but he's another year older with even more innings on his arm. Michael Pineda is still a head case so we shouldn't expect much out of him. Severino, along with Chad Green, Luis Cessa, Bryan Mitchell, and Adam Warren will compete for the final two spots in the rotation. While the Yankees brass would love to see Severino hit the ground running and make a case for himself as a starter in spring training, his spot in the rotation is in no way guaranteed.

After making his major league debut in July 2015, Severino made an instant impact. Thrust into the middle of a pennant race, the young right hander showed that he belonged in the majors. In 11 starts, Severino went 5-3 with a 2.89 ERA. The Yankees expected his early success to carry over into 2016 when they guaranteed Severino a rotation spot out of spring training. Unfortunately, this was not the case. Severino got off to an abysmal 0-6 start before the Yankees placed him on the disabled list, and subsequently demoted him to the minors to work on his issues. As a starter in 2016, Severino went 0-8 with an 8.50 ERA. It appeared as if 2016 would be a lost season for the promising right hander, yet his move to the bullpen appeared to revitalize Severino's abilities.

As a reliever, Severino helped stabilize a depleted bullpen. After the midseason trades of Aroldis Chapman and Andrew Miller, the Yankees moved Dellin Betances into the closer role. Tyler Clippard and Adam Warren, both acquired around the trade deadline, slid into the set up roles. Neither of these two possesses outright dominant stuff. Severino, on the other hand, does. As a reliever, Severino went 3-0 with an 0.39 ERA. In 23.1 innings of work, Severino only gave up one earned run and struck out 25. For the duration of the season out of the bullpen, Severino shined. With the addition of Severino to the backend of the bullpen, the Yankees somehow stayed in contention through September, despite having formally given up on the season in July.

Most Yankees fans, including myself, want to see Severino succeed as a starter. That being said, it might not be the worst thing in the world if he had to become a reliever long term. One thing is for sure. There cannot be a constant shuffling between the bullpen and starting rotation. As the organization learned the hard way with Joba Chamberlain, this is not the way to go. A decision must be made on which trajectory the Yankees see for the young right hander. Since the bullpen, as currently comprised, is the Bombers' biggest strength heading into 2017, there is not an immediate void for Severino to fill as of now, lessening the temptation of having him pick up where he left off last season.

It is very likely that Severino's struggles at the onset of last season can be attributed to a sophomore slump of sorts; however, it may not be that simple. Even if Severino does struggle in spring training, the Yankees should give him a rotation spot. He clearly has the most upside out of all the options competing for the open spots. Sending him to the minors at this point may be fruitless. The Yankees will not be competing for a championship in 2017. Quite a few youngsters will be given opportunities to shine next season, and Severino should be one of them. We already know what he is capable of doing out of the bullpen. It would be much better for the team moving forward to give him a fair shot at a rotation spot.

Luis Severino is a very talented young pitcher. In an ideal world, he will evolve into the homegrown ace the Yankees have desperately been looking for. The starting rotation battle is the most intriguing storyline of this coming spring training. Regardless of what happens, the Yankees should give Severino a rotation spot. We will never know what he's truly capable of if he is not given a shot. If, after being given an ample amount of time to prove himself as a starter, Severino continues to struggle, then it might be time to reassess the organization's plans for him moving forward. Knowing that the contingency plan of developing Severino as a dominant reliever exists is surely a nice cushion. As a team in transition, the Yankees have the luxury of finding out what their young talent is really capable of. It's about time they finally make this determination with Severino.