By Unknown - January 04, 2017
It was not long ago I remember Doug Fister shutting down the Yankees in the fifth game of the 2011 Divisional Series. Fister’s outing seemed like it was the coming out party for the tall, lanky right-hander from California.  I also remember being shocked when the Tigers declared him on the trading block following the 2013 season, in which Fister finished with a 3.67 ERA and shined throughout the postseason. Detroit had decided to prioritize other pitchers ahead of the 27 year-old Fister and concluded they would not be able to sign him long term once his contract expired.  It seemed too good to be true that the Yankees had a chance to land a young impact starter on the rise, without shelling out a mega deal. Well, due to the drained farm system we were accustomed to at the time, it was. Fister was soon shipped off to the Washington Nationals. 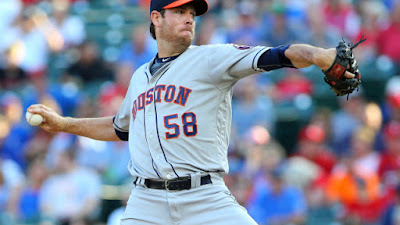 Photo Credit: Getty Images/Rick Yeatts
In 2014, Fister delivered for the Nationals. Although he started the year on the DL, Fister finished with 164 IP, 1.08 WHIP, and a 2.41 ERA. In 2015, with the signing of flame thrower Max Scherzer and team mainstays Stephen Strasburg and Gio Gonzalez, the Nationals boasted possibly the best rotation in all of baseball. This notion quickly dissolved, at least in Fister’s case, as he appeared in only 25 games, compiling a 5-7 win-loss record and a 4.19 ERA. He yet again spent extended time on the DL and severely hurt his case for a free agent payday. After signing a one-year deal with the Houston Astros, 2016 got off to a poor start for Fister, as he pitched to nearly an ERA of six over the first month of the season. Things got better from there though, as he dropped his ERA to 3.60 by the end of August. A very poor last month of the season left Fister with a very mediocre stat line of 12-13 W-L/4.64 ERA/ 1.425 WHIP.

Fast-forward nearly six years from Fister’s performance in the divisional series versus the Yanks, and the right-hander is unemployed and looking for a job. Up and down performance, along with health concerns has created a cloud over Fister, and forced general managers to reconsider signing the 32 year old. As we’ve seen in the past, this could be an opportunity for Brian Cashman to turn other’s garbage into Yankees treasure. While injury is always a looming concern, Fister is coming off his healthiest season in years. His pitching style is also ideal for the hitter friendly confines of the “new” Yankee stadium. His career 48% ground ball ratio puts him in or about the top 50 pitchers in that category year in and year out. While his strikeout ratio has been pretty consistent throughout his career, his walks per 9 has risen slightly over the past 3 years. You can chalk the decline up to his age, but injury may play a large part in his seemingly worse control. As I stated earlier, last season was the first season he was able to avoid major DL stints since 2013. His rocky last month could be due to fatigue stemming from not completing a full season in nearly 3 years.

It’s also hard to ignore Fister’s postseason statistics. His 2.60 postseason ERA and history of winning important postseason starts could be a great asset if the 2017 Yankees are able to make a playoff run. Back in 2011, Fister was the young gun in a sea of veterans immersed in a battle for the pennant. If the Yankees take a flier on Fister in 2017, this time around he could be the veteran presence bringing experience to a rotation that lacks an answer for a consistent backend starter.