By Unknown - January 07, 2017
Right off the bat, let me start off by saying that this only makes any sense for the 2017 New York Yankees in the event that Brian Cashman can unload Chase Headley on some poor general manager desperate for a veteran presence at third base.  Okay, now that that's out of the way, let's take a look at an exciting player that I would love to watch in pinstripes this upcoming season. 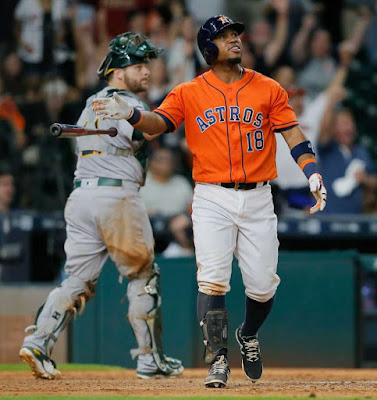 When Luis Valbuena made his Major League Debut with the Seattle Mariners in 2008 he was still a prized young prospect out of Venezuela who was projected to be a consistent middle-of-the-order threat who could man a number of positions.  After appearing in just 18 games with the Mariners in 2008, however, he was shipped to Cleveland as part of a three team trade that also included the New York Mets and went on to spend the next three seasons within the Indians organization, bouncing between triple-A Columbus and the bigs. After his time with the Indians, he played out the 2012-2014 seasons with the Chicago Cubs before he was traded to Houston prior to the 2015 season as part of the package that brought Dexter Fowler to the Cubs.

Valbuena's best season to date was with the 2015 Houston Astros as he mashed 25 home runs despite a poor .224 batting average.  This past season with Houston, with competition at third from young stud Alex Bregman as well as an unfortunate hamstring injury, Valbuena was used less as an everyday player, appearing in just 90 games, but saw his batting average climb to .260, his on-base-percentage increase from .310 in 2015 to .357 in 2016, and also produced a noteworthy 124 OPS+, up from 106 the year before.  All in all, Valbuena played to a combined 4.7 WAR in his two season with the Astros.  Compare that to the 3.7 WAR the Yankees have gotten from Chase Headley over the same timeframe.

Talks of the Yankees interest in Valbuena popped up in early December, but have since cooled, and he remains available on a very slowly developing free-agent market. It's not clear if the Yankees are still fielding offers for Chase Headley (and Brett Gardner, for that matter), or if they are content with riding into the 2017 season with the roster as currently constructed.  I for one, however, have grown tired of seeing Chase man the hot corner every night due to his year-over-year decline at the plate coupled with the fact that he no longer plays the strong third base the likes of which won him the 2012 National League Gold Glove at third base. That also happened to be the same season in which he led the National League in runs batted in with 115 and finished fifth in MVP voting. Those days seem to be long behind us.

While I don't think Luis Valbuena is the one player to putting the 2017 Yankees over the hump, he is a year and a half younger than Chase Headley, plays a comparable defensive third base (while also being able to spot at first if/when needed), and his power definitely trumps what New York has gotten from Headley the past 2 seasons.

And not that it matters, be he would also likely come on just a one year deal at about three to four million dollars less than what the Yankees are currently on the hook for with Chase Headley the next two years.  As an added bonus, this would also open up the third base position going into the 2018 season for the likes top Yankees prospects Miguel Andujar, Gleyber Torres or Jorge Mateo.

It's not clear if Valbuena would be willing to come to New York in a reserve role, so this may all be just a pipe dream assuming the Yankees aren't able to offload Headley.  One thing is for sure, however, and it's that this guy still has plenty of pop left in his bat and could fill a pretty interesting flex role for the 2017 Yankees.  Joe Girardi seems to love Ronald Torreyes, but I'm a firm believer that a player like Valbuena represents a pretty clear upgrade.  Again, he might be holding out for an everyday role in 2017 and that might not be something the Yankees are able to provide.