The foggy future of Masahiro Tanaka

By Unknown - January 10, 2017
The summer of 2016 will always be known as the “summer of Gary”.  Gary Sanchez took the Bronx by storm. He once again made Yankee games must see TV. Every so often a guy comes along and takes a fan base by storm like that. Before the “summer of Gary”, there was “Tanaka time.” 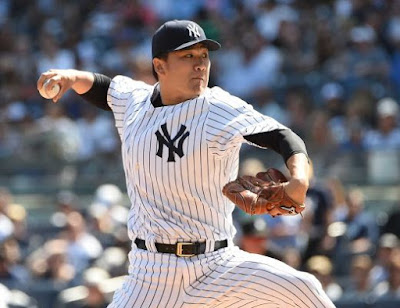 2013 was filled with a lot of fan fare in the Bronx. It would be the final season of two Yankee legends, Andy Pettitte and Mariano Rivera. Unfortunately, their storied careers didn’t have a storybook ending. The Yanks finished tied for 3rd in the American League East and had their worst record since 1992. The old winning regime seemed to be fleeting, as the homegrown superstars began to retire and the mega contracts of the late 2000’s seemed to be catching up with the Yankees.  This was especially true for the starting rotation. Pettitte rode off into the sunset, Hiroki Kuroda also flirted with retirement, C.C. Sabathia’s age and injuries were catching up with him, and the “future” of the rotation; Phil Hughes, wasn’t developing into the front end starter that management once thought was inevitable. Then, like just out of a movie script, word came from Japan that the powerhouse Rakuten Golden Eagles were contemplating posting their brightest star to the Major Leagues. The race for Masahiro Tanaka had begun.

The Yankees didn’t want Tanaka. They needed him.  Frankly, as it turns out, Tanaka also needed the Yankees. The only thing greater than Tanaka’s skill and accomplishments, was his fan fare. Tanaka was a Japanese living legend. He threw over 700 pitches in a 6 game high school series, he won 30 straight professional games, his era hovered around one, and he led the eagles to a championship title. Off the field he donned magazines covers, was married to a pop idol, and he himself was as famous as any Japanese movie star. Masahiro Tanaka was meant for New York City.

Lucky for the Yankees, the posting system for international players changed. It was no longer bidding war fashion. The player now had the power to decide where he wanted to play, at least to extent. The Yankees took no chances with Tanaka. Their personal Japanese ambassador, Hideki Matsui headed a team that flew Tanaka to New York and pitched him on why he needed to be nowhere else but the Big Apple. The pitch worked, and just days later Tanaka was a New York Yankee. The minute the contract was signed the skepticism built. Tanaka’s success or failure was the talk amongst baseball. After all, for every Hideo Nomo or Yu Darvish there is a Kei Igawa or Hideki Irabu. The Yankees knew that better than anyone.

I remember running through the hot summer Hoboken night from my apartment to the bar to watch Tanaka pitch. His starts, once again, made Yankee games must watch baseball. He was poised, his splitter was electric, and at times he seemed unhittable. He won 12 games before the all-star break and was elected to the all-star team. Then it happened. On July 9, Tanaka partially tore his UCL. My initial thought was it was over. This movie wouldn’t have a Hollywood ending. All those innings and pitches in Japan had caught up to him. He’d never be the same. And truthfully, he hasn’t been the same, but not so much in a bad way.

Tanaka decided to forgo Tommy John surgery and instead rest his arm to repair the UCL. Many were skeptical of skipping the surgery and blamed his no quit Japanese attitude. But, for the most part, the strategy seemed to work. He’s no longer going to buzz the radar gun with a high 90’s fastball, but he has slowly regained his velocity and regularly sits in the low to mid 90’s. While the injury always seems to loom over Tanaka, it hasn’t slowed him much. While he has seen time on the DL or missed starts due to injury in all three years in the Bronx, his numbers tell the tale of bonafide Major League Ace. Over his first three years Tanaka has averaged a 3.12 ERA, 1.045 WHIP, and a total 11.7 WAR. To put his value into perspective, here is the war of the Cy Young Award winners since Tanaka has been in the Majors.

Keep in mind Tanaka has only been here for 3 years. Not in the majors, in this country. He went through a complete culture change. Not to mention, he is younger or the same age than everyone on this list. Only Kershaw has a lower career ERA.

After this season Tanaka can opt out of his contract. Similar to Alex Rodriguez in 2008, it is a rich get richer situation. But it’s hard to fault Tanaka if he opts out. He deserves whatever it is that he gets. Myself, and I believe most Yankee fans think the Yankees would be smart to resign him. While it appears similar to the ARod situation, it is actually night and day. Tanaka is only 28 years old, while Rodriguez was heading to the twilight of his career. You can argue that Tanaka is yet to even hit his prime. Again, he has only been in the league for three years and there is no reason that he wont keep making adjustments to get better. There is of course the injury concern. He has never pitched 200 innings in a season, although he was only one shy in 2016. But in the end, isn’t that a concern with every signing? Especially signing pitchers? All it takes is one pitch. One single pitch and your career is changed forever. He has certainly proven that he has rebounded from the initial injury. What happens in the future is anyone’s guess, but his numbers do not lie. While the proof is in the numbers, the real testament is Tanaka’s focus and competitive mentality. Playing in New York is unlike any other place, and there is no larger stage. Time and time again we have seen superstars come and fail, but Tanaka has so far proven he is capable of playing the lead role in pinstripes. With the Yankees growing salary space and new injection of youth, Tanaka’s journey could end back at the top, just in a different city, 7,000 miles from where it started.