What does the future hold for Michael Pineda?

By Unknown - January 19, 2017
When the Yankees sent then-top prospect Jesus Montero to the Seattle Mariners prior to the 2012 season, they were expecting to receive a top flight starter in return. Michael Pineda, having come off an impressive rookie campaign with the Mariners, appeared to be an ace in the making. Though he went 9-10 in his rookie season, Pineda put up a 3.74 ERA while accumulating 173 strikeouts in 171 innings. Pineda has been anything but an ace since arriving in New York. Lucky for the Yankees, Montero turned out to be a complete bust. With free agency on the horizon for Pineda, 2017 will be a make or break season. We know Pineda has the talent to be a dominant starting pitcher. Most of his problems, however, seem to emanate from mental issues. Barring a Cy Young season, this will likely be Pineda's last ride in pinstripes. Considering the fact that the Yankees are banking on the erratic right hander to help anchor an already shaky rotation, we can only hope Pineda is motivated by his imminent free agency to finally figure out whatever has been holding him back since his arrival to the Bronx. 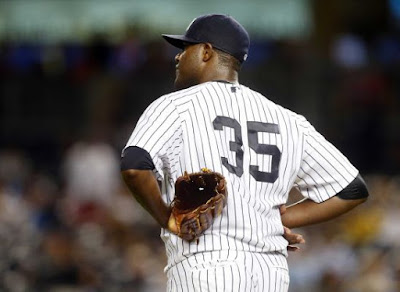 Photo Credit: Jim McIssac/Newsday
The Yankees made a huge gamble when they acquired Pineda back in 2012. Parting ways with Montero, a player who many viewed as the future of the organization, was not an easy decision. Though this trade did not turn out the way either the Yankees or Mariners would have liked, the Bombers seem to have emerged victorious. Montero, who struggled immensely both on and off the field, is no longer in the Mariners organization. As big of a headache as Pineda has been on the field for the Yankees, he has still been a serviceable starting pitcher, who, at times, can show flashes of dominance.

Pineda missed the 2012 and 2013 seasons due to injury. Considering that the young right hander had not even thrown a pitch in a Yankee uniform two years after the trade, he looked to be a big time bust. To start off the 2014 season, Pineda reminded the Yankees exactly why they traded for him in the first place. Prior to his infamous pine tar ejection at Fenway Park in April, Pineda got off to an impressive start. In his first four starts of the season, Pineda put up a 1.83 ERA. Though he ended up suffering yet another injury after his pine tar suspension, the right hander still finished the season 5-5 with a 1.89 ERA in 76.1 innings.

Heading into 2015, the Yankees thought they had in Pineda a solid number two starter to back up Masahiro Tanaka. It turns out they were poorly mistaken. Pineda emerged as the erratic headcase that he has been for the Bombers these past two seasons, going 12-10 with a 4.37 ERA. Granted, these numbers are solid for a back of the rotation starter, but the Yankees were expecting much more out of Pineda. Though he showed occasional flashes of dominance, Pineda's inconsistencies plagued the Yankees for most of the season. In 2016, Pineda's struggles became much more profound. Though he stayed healthy for the entire season, Pineda went 6-12 with a 4.82. Astonishingly, he struck out 207 batters in 175.2 innings. Alas, the curious case of Michael Pineda.

Now, lets fast forward to 2017. The Yankees are a team in transition. Though the bullpen and offense appear to be strengths heading into the season, the starting rotation is a glaring weakness. Aside from ace Masahiro Tanaka, the Bombers aren't really sure what they have. Pineda, along with veteran CC Sabathia, and two of Bryan Mitchell, Luis Cessa, Luis Severino, Chad Green, or Adam Warren will round out the thin rotation. Due to the amount of uncertainty surrounding the starting staff, the Yankees are counting on Pineda to be as reliable as possible.

Given Pineda's recent track record, the Yankees would be naive to believe he will finally turn it around. That being said, money talks. For the first time in his career, Pineda has the opportunity to earn himself a hefty contract. An impressive 2017 showing can erase a lot of the concerns raised about Pineda the last two seasons. Every time it appears that Pineda has finally turned it around, he follows up with a regression. For Pineda, it's one step forward, followed by two steps backwards. Personally, I'm not too optimistic when it comes to this erratic right hander. If the Yankees were going to fix him, they would have done it by now. Pineda has been with the organization for over five years. His problems transcend mere mechanical issues. He needs to see a sports psychologist on a regular basis.

The fate of the 2017 New York Yankees will likely be determined by the performance of a shaky starting rotation. If the rotation does outperform expectations, Pineda will have to put together a hell of a bounce back season. It's been a long and frustrating tenure for Pineda in the Bronx. As much as the organization has wanted him to succeed, the Pineda just can't figure it out. With free agency on the horizon, Pineda will be motivated to put together a career year. Even if he does, the Yankees will likely be done with him at the end of the season, though I suppose it would be premature to rule out anything at this point in time. If the Yankees are to compete for a wild card spot in 2017, they need Pineda to pitch like he is capable of pitching. The talent has always been there. Now, it's simply a matter of executing. Unfortunately for both the Yankees and Pineda, whatever mental issues he's been facing may be an impenetrable obstacle to his prolonged success.