Will 2017 be the season Bryan Mitchell finally makes an impact?

By Unknown - January 07, 2017
For the last few years, the Yankees have been waiting on Bryan Mitchell to make an impact. Prior to suffering a near season-ending injury at the conclusion of spring training in 2016, Mitchell was on track to play an important role in the Yankees bullpen, likely pitching the crucial middle innings. Barring injury or an atrocious spring training, Mitchell will make the big league club. Whether that will be as a starter, or reliever, has yet to be determined. Mitchell certainly has potential; however, he has not yet been given a consistent opportunity at the major league level to make a long-term impression. 2017 will more than likely be the year. With two rotations spots up for grabs at the moment, Mitchell will have a prime opportunity to shine in spring training and earn himself a spot on the starting staff. Even if he isn't chosen as a starter heading into the season, he can still make an impact out the bullpen. Assuming Mitchell can stay healthy for the duration of 2017, this may finally be the season that the Yankees find out whether he can excel in the big leagues. 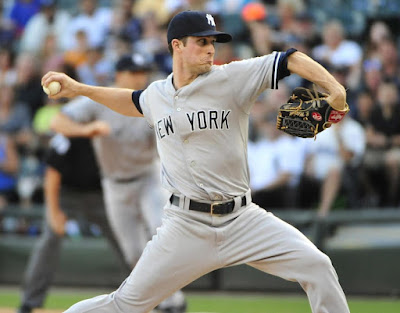 Photo Credit: David Banks/Getty Images
As of now, the only locks for the starting rotation are Masahiro Tanaka, CC Sabathia, and (unfortunately) Michael Pineda. That leaves two spots up for grabs this spring training. While Brian Cashman can certainly pull a trade out of nowhere, as he did two years ago for Nathan Eovaldi, such a scenario appears to be increasingly unlikely. Along with Luis Severino, Chad Green, Luis Cessa, and Adam Warren, Mitchell is competing for one of the two remaining spots. Since each of the four pitchers has shown promise at select points in their careers, there are no clear favorites going in. The Yankees would love to see former-top prospect Severino win one of these spots, but besides that potential bias, each pitcher will come in on an even playing field.

Last spring training, Mitchell put up impressive numbers, and probably earned a spot on the major league roster. Unfortunately for Mitchell, he suffered from an intense form of turf toe in early April, sidelining him until September. Mitchell has shown versatility in both the minors and majors, paving the way for him to serve an Adam Warren-like role. Mitchell has even indicated his desire to be a member of the rotation come 2017. If he can hit the ground running, and pick up where he left off last spring training, he shouldn't have a problem earning a spot.

After he returned from his injury in September, the Yankees inserted Mitchell into the starting rotation. Mitchell went 1-2 with a 3.24 ERA in five starts. Though Mitchell had one really bad outing against the Los Angeles Dodgers in which he gave up six runs in 2.1 innings, he made up for this with three solid starts to end the season. After his meltdown against the Dodgers, Mitchell gradually improved in his remaining three starts. In his last start of the season, Mitchell pitched seven shut out innings against the Boston Red Sox. The sample size is small, but Mitchell has shown the talent is there.

Mitchell will turn 26 by the time the 2017 season starts, meaning father time is still on his side. Should he stay healthy, this may be the year that the organization has been waiting to see out of the right hander. Mitchell's 20 appearances in 2015 were lackluster at best, yet he redeemed himself last season after coming back from a devastating injury.

It is no secret that the Yankees have had trouble developing good starting pitching for the last 20 years. I'm struggling to think of an above average starter to come through the Yankees system since Andy Pettitte in the 1990s. With the rise of Gary Sanchez, Greg Bird, Aaron Judge, and other position players on the horizon, the Yankees would love for nothing more than to see two of their young studs round out the 2017 rotation. If I were to give my best guess, I'd favor Severino and Mitchell out of the gate. Granted, this will change based off of spring training performance; however, the two of them seem to have the most upside out of all the contenders.

I've said this in just about every offseason article that I've written, but I'll say it again. The Yankees are a team in transition. The Bombers will not realistically compete for a championship for at least two years. In all likelihood, the organization views 2017 as a year to showcase their homegrown talent. Cessa and Green had their moments to shine in 2017, but I don't think either of them can match the upside of Severino and Mitchell. Adam Warren potentially joining the rotation has already been covered pretty extensively (CLICK HERE), yet his proven ability to pitch the tough middle innings may be too crucial to the bullpen to have him join the starting rotation. Since the Yankees have not one, but two, rotation spots up for grabs this spring training, I'm very intrigued by this storyline. Of course I'd like to see the best two candidates emerge victorious, but I'm pulling for Mitchell to grab one of the spots and run with it.