Winter Reflection: We all need baseball in our lives

By Unknown - January 09, 2017
Let me paint a picture for you.  If your morning was anything like mine, you woke up and the sun had not yet started to rise. You went outside and the temperature was in the single digits. You need to run your car for at least five minutes to warm it up while you scrape ice off your windshield. You cuss under your breath as you get behind the wheel about how miserable winter is. 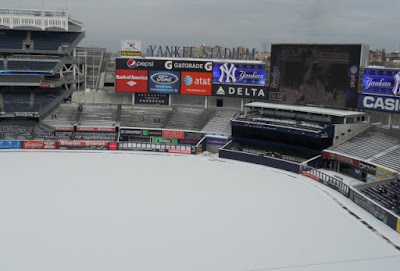 If you're anything like me, you just had your heart ripped out last night as you watched a pretty poor performance from your favorite football team in a playoff game as their season came to an end. You also root for a hockey team that stinks on ice (pun intended) and a last place basketball team that doesn't have control over its own first round pick for another three years.  Yes, these are indeed the darkest of times.

But fear not, hope is on the horizon. In just five short weeks – 34 days to be exact – pitchers and catchers across baseball will report to their respective spring training camps in Arizona and Florida.  The days will get a little longer.  The temperature will rise.  Animals will awake from their Winter slumber. And all our winter depressions will be no more.

Yes, baseball season is soon to be upon us, and that is a wonderful thing to look forward to.  Eighty-three days from today the New York Yankees will once again take the field as they open their 2017 campaign at The Trop against the Tampa Bay Rays.

Baseball has always been, for me at least, about new beginnings. About hope. About good times.  About summer, long, hot nights and the daily grind of a 162 game season.

Here at the BBB, we spend a lot of time analyzing potential trades or free-agent additions, up and coming prospects that get us excited, and the bright future this franchise has ahead of it. We will also critique players we don't like and question controversial managerial decisions made by Joe Girardi and his binder.

What I wanted to do with this piece today is talk about baseball on the surface. I'm not going to analyze players or front office decisions.  I'm not going to play GM for a day and determine the future of the franchise.  I simply want to reflect on how important baseball – Yankees baseball, that is – is to all of us.

Soon enough I'll find myself back at that familiar ballpark on River Avenue in the Bronx.  I'll find myself in my familiar Section 209 every Friday Night with the crew that I've grown so close with since the new Stadium opened in 2009.  Soon I'll be watching Masahiro Tanaka throw his signature split-finger fastball, Gary Sanchez hitting bombs into the bleachers and Aroldis Chapman dealing straight fire to close out Yankees victories.  There will undoubtedly be trials and tribulations along the way, and the consensus here is that the Yankees might not even make the playoffs this season, but this year might just be the most fun and low-stress season of baseball I've ever watched since I started rooting for the Yankees way back in 1996.

Yankees baseball provides us with a nightly escape from everything else the world is throwing at us to bring us down.  For three hours every night, we are a collective family that roots for our favorite players on our favorite team. We cheers when they win and sulk when the lose, but every night we keep coming back with renewed hope.

Baseball is our national pastime, and while many will argue the season is too long, the games are boring, or it's not their favorite sport, we know better.  Baseball is our lifeblood and our lives are a little bit empty every year between November and March when no meaningful games are being played.  When our New York Yankees don the famous pinstripes this April, we will all be better off because of it.  To quote Michael Kay, as he says every year, "hope springs eternal".

I'll end this article just as I started it, so let me paint another picture for you:

The sun is shining and the weather is warm. The birds are chirping, the bees are buzzing and the beer is on ice.  Imagine the smell of fresh cut grass and picture a crystal clear sky of blue.  Now picture the crack of a bat as it makes contact with the leather of a baseball and the snap of a glove as it receives that same batted ball.  Imagine the sound of 40,000+ sun-bathed fans standing and cheering in unity as a pinstriped hero crushes a ball over the wall.  Hear the sounds of the ballpark – the Yankees Fan Marquee, the Cotton-Eyed Joe, everyone's favorite ballpark games the Great Subway Race and the hidden ball Cap Game, the sound of Frank Sinatra and 40,000 joyous fans singing New York, New York as they exit the ballpark following another Yankees victory.

That reality is on the horizon. The thrill of Yankees baseball returns in just 83 days.