By Unknown - January 22, 2017
With most of the Yankees offseason wrapped up, a few loose ends remained.  The team is not expected to make any more moves via free agency or add anyone via trades, however, business was still to be done with the seven Yankees who were up for arbitration. 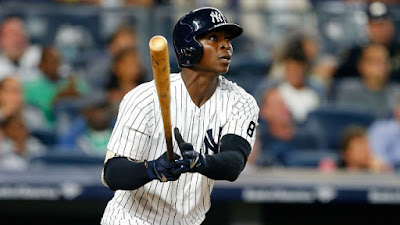 For those of you who are unfamiliar with rookie contracts, I'll quickly break down how they work and get right into the arbitration process. Initial rookie contracts contain three years of team control at the league minimum salary, after which the players are arbitration eligible for three more years.  All in all, this represents six years (five if a player qualifies for "Super Two" status) of initial control on a newly drafted player, with team control transferable through trades. The only exceptions to this six year window are with International signings, or when a club chooses to non-tender a player, usually due to injury concerns.

This winter, all seven Yankees who qualified for arbitration were given a fair shot at the process and – at the point of the article – only one will be headed to an arbitration hearing.  The seven Yankees who went through the arbitration process this season were Didi Gregorius, Michael Pineda, Dellin Betances, Aaron Hicks, Adam Warren, Tommy Layne and Austin Romine.

Typically the way the arbitration process works is the player and his agent come to the negotiation table with one figure, the team with another, and they either settle somewhere in the middle, or they cannot agree upon an amount and they take their argument before an arbiter who determines with of the two figures is the most fair.  These hearings are held in early February and have a history of getting pretty heated between player and club.

Six of these players settled contracts with the Yankees before having to go to arbitration, leaving only Dellin Betances unsigned at this point.  Contracts (all one-year deals) for the six Yankees who have already signed are as follows (all figures per MLBTR's Arbitration Tracker):

This, of course, leaves us with Dellin Betances.  Betances – also in his first year of arbitration – filed at $5 million, while the Yankees filed at $3 million.  With a two-million dollar gap between the two and neither side willing to budge, the arbiter will ultimately be the one to decide Betances' salary for 2017.

Interestingly enough, the Yankees have not gone to an arbitration hearing a single time since they last did with Chien-Ming Wang way back in 2008.

From the Yankees' perspective, I get not wanting to increase Dellin's contract by a factor of 10 (he made just $507k at the league minimum last season) in just his first season of arbitration eligibility because it sets him up for even larger contracts over the next two seasons.  However,  Betances has been among the league leaders in innings pitched among relievers, appearances, strikeouts and K/9 in each of the last three seasons since he assumed the set-up man role behind David Robertson in 2014. His body of work is worthy of such a pay raise.