By Unknown - February 27, 2017
When the Yankees became sellers for the first time in a long time leading up to last year's non-waiver trade deadline, they received a number of talented youngsters in exchange for the veterans they traded away. Dillon Tate was the biggest name coming to the Bombers in the trade that sent veteran Carlos Beltran to the Texas Rangers. Having drafted him with fourth overall pick in 2015, the Rangers had high hopes for Tate. The 22-year old right hander only has one minor league season under his belt, but Tate certainly has the "stuff" to succeed in the majors. Since 2017 will be his first full season with the Yankees organization, it will be interesting to see what adjustments Tate makes in his attempt to improve the disappointing stat line he put together in 2016. 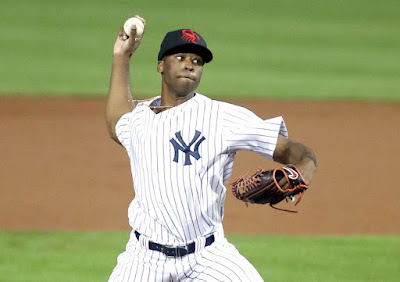 Tate was a bit of a sensation in college, prompting him to become the first player taken out of the University of California, Santa Barbara in the first two rounds. Tate's fastball averages between ninety-two and ninety-eight MPH, while his slider comes in at about eighty-seven MPH. If Tate can improve his curveball and change up, he has the potential to have an impressive arsenal of pitches. Tate's only minor league experience has come at the Single A level.

Prior to his trade to the Yankees last July, Tate struggled a bit with the Single A Hickory Crawdads. In 17 games, 16 of which were starts, Tate had a 5.12 ERA. In 65 innings pitched, Tate gave up 78 hits, walked 27, and struck out 55. These numbers are subpar at best. Considering Tate is very early along in his professional career, the alarm should not have been sounding for the Rangers just yet. One of the most alarming observations of Tate was the declining velocity of his fastball. Hopefully, this can be attributed to Tate undergoing struggles adjusting to professional hitting. His hamstring injury also likely played a role in the mediocre showing while playing for Hickory.

Last August, the Rangers were in the thick of a playoff race. In need of a power bat to improve their offense, the Rangers were a natural fit for Beltran. In the midst of an all star season in the last year of his contract with a Bombers team that was clearly entering a transition period, Beltran was a perfect match for the Rangers. Since the Yankees had the leverage in these negotiations, they were able to set some high demands. The very fact that GM Brian Cashman was able to land a fourth overall pick for a 39-year old that was entering free agency at season's end attests to his talent when it comes to selling, something he is not accustomed to doing. The Yankees made out like bandits last July, also landing top prospects Clint Frazier, Justus Sheffield, and Gleyber Torres.

After becoming a member of the Yankees organization, Tate was assigned to Single A Charleston. The Yankees decided to take a different approach with Tate. The Rangers had been using the young right hander as a starter. The Bombers, on the other hand, decided to try him out as a reliever. In 7 appearances for a total of 17.1 innings, Tate had a 3.12 ERA, while giving up 21 hits, walking six batters, and striking out 15. These numbers do not jump off of the page by any stretch of the imagination, but they do signal improvement. Long term, the Yankees probably still see Tate as a starter, but they may have believed the best way to fine tune him was to revert him to relief first.


It's very unlikely that Tate will see the major leagues any time season. Heading into 2017, the Yankees will likely have him get accustomed to starting again. Since his fastball velocity did return after coming to the Yankees organization, the team has to be encouraged by his improvement, albeit he did only pitch in seven games. This season, the organization's goal for Tate has to be to ensure that he gets more innings under his belt. The more experience for Tate, the better. He showed some encouraging signs with Charleston last season, so the Yankees can only hope 2017 will be a huge step forward for the right hander with the eclectic delivery.

The Yankees youth movement is in full force. With Gary Sanchez and Aaron Judge expected to have starting jobs in the majors this season, and the likes of Gleyber Torres, Jorge Mateo, Clint Frazier, and Justus Sheffield on the way, the Yankees should be a relatively young team come 2018-19. The free agent class that succeeds the 2018 season will be something Yankees fans can look forward to. Hopefully, in two or three years Tate will be ready to make an impact in the majors. Given the Yankees pathetic record over the last two decades when it comes to developing starting pitching, it's hard to be optimistic about Tate's future. One thing is for sure: Dillon Tate has the talent to succeed in the majors, but such a favorable outcome hinges on the adjustments he makes to his mechanics over the course of the next few seasons.