By Unknown - February 22, 2017
Tyler Austin made quite the impression during his major league debut last August. Austin and fellow rookie Aaron Judge hit back-to-back home runs in their first Major League at-bats. Following his explosive entry to the Bronx, Austin cooled off considerably, still managing to show promise. Heading into 2017, Austin was expected to compete with Greg Bird in spring training for the starting first base job. Austin's versatility has made him a reliable option to play both corner outfield positions and third base, along with first. Unfortunately for both Austin and the Yankees, the 25-year old broke his left foot. The injury will sideline Austin for approximately six weeks. The recent signing of first baseman Chris Carter softens the detriment of Austin's injury; however, the Yankees are still hoping he can make an impact upon recovering from his broken foot. 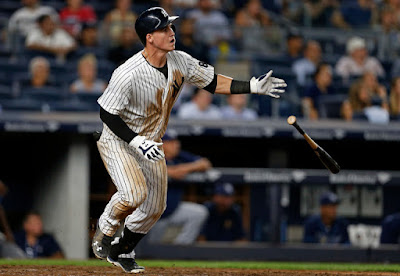 After drafting Austin out of high school in the 13th round in 2010, the Yankees likely weren't expecting much out of the player who would work his way onto top prospect lists. Having rebounded from his testicular cancer diagnosis at age 17, the youngster was determined to turn this comeback into a successful major league career. Prior to the start of the 2013 season, Baseball America ranked Austin as the #77 prospect in the sport. Three years later, he wasn't even invited to spring training. In fact, we had Austin ranked at #30 on our list last year, and wrote that if he didn't have a productive year, it could've been his last with the Yankees. He answered the bell, piecing together a very successful year in the minors.

Having been called up to the majors along with Aaron Judge last August following the botched departure of Alex Rodriguez, the Yankees weren't sure what to expect out of Austin. In 57 games with Triple-A Scranton Wilkes-Barre, Austin hit .323 with 14 home runs and 49 RBIs. Austin's resurgence prompted the Yankees to finally give the then 24-year old prospect a chance to prove himself in the majors.

During his 31 games in the majors last season, Austin hit .241 with five home runs and 12 RBIs. Of those home runs, two were quite memorable. The first, as referenced in the introductory paragraph, came in the first at-bat of his career. The second was an exhilarating walk-off home run against the Tampa Bay Rays in September. Though Austin struggled a bit after his first successful at bat, he rebounded nicely in the final month of the season to put together a respectable stat line. Heading into spring training, Austin put himself into a position where he was a player to watch within the organization.

Prior to suffering the foot injury that will end up sidelining him for spring training, and ultimately prevent him from competing for a roster spot, I would have put my money on Austin making the team. The Yankees will likely carry four bench players at the start of the season. Though catcher Austin Romine, DH/1B Chris Carter, and OF Aaron Hicks have their roster spots locked up, an interesting competition was taking shape for that final infield spot. I must note, however, that both Ronald Torreyes and Rob Refsnynder likely would have had the upper hand over Austin because of the range of positions each player is capable of competently manning.

Had the Yankees not signed Carter to a one-year deal, Austin would have all but been assured a roster spot. Likely competing with Greg Bird for the starting first base position, Austin was a nice fall back option for the Bombers. Providing the Yankees with some pop off the bench, and the ability to play multiple positions, Austin could have been a weapon late in games. As fate would have it, such a role was not in Austin's future. Though the signing of Carter likely precluded Austin from making the roster out of spring training, it would have been great to see him experience at least the semblance of competing for a roster spot.

In light of his recent injury, Austin's future with the organization may be up in the air. In an ideal world, the Yankees see Bird as the heir to Mark Teixeira. In the event that Bird struggles out of the gate, Carter is a nice insurance policy to hold down the fort while the youngster rectifies his potential shortcomings. When it comes to outfield depth, Austin isn't too high on the hierarchy. Moving forward, Clint Frazier, Blake Rutherford, and Aaron Judge (who will likely be the opening day right fielder) all have more upside than Austin. In the case of an injury, players like Hicks and minor leaguer Mason Williams are also options to fill in.

In summation, Austin may not have a role with the Yankees moving forward. Of course, a baseball season is a very fluid situation. Things can change at any second, as injuries and struggles are unpredictable. Austin is a competitor with a compelling personal story. I really enjoyed seeing him usher in last season's youth movement, along with Judge and Gary Sanchez. Austin certainly has what it takes to play in the majors, but when he will be given the opportunity to show that again consistently is unknown. That being said, Austin is only 25 years of age, and has a lot of baseball left to play. I don't expect Austin to have a profound impact on the 2017 Yankees, but I'd love to see him on the team at some point in the season.