By Unknown - February 12, 2017
Drafted out of Mississippi State University in the sixth round of the 2014 draft, Jonathan Holder ranks in at number 28 on the BBB prospect list. Holder has been impressive throughout his minor league tenure with the Bombers, earning a brief call up last season. Though he struggled a bit during his few games in the majors, Holder has a bright future. With the "Scranton Shuttle" strategy the Yankees have employed for the bullpen over the last couple of seasons expected to be in full swing once again come 2017, it's fair to predict Holder will find himself in the majors sooner rather than later. 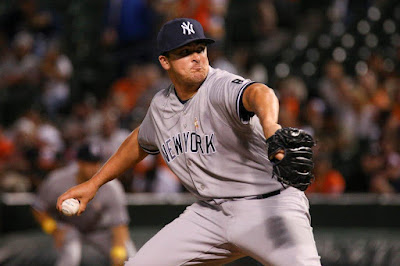 After putting together impressive numbers out of the bullpen at Mississippi State, the Yankees used Holder primarily as a starter in 2015. Though he performed well, the Bombers ultimately decided that the bullpen was Holder's proper niche. The young right hander entered the 2016 season ready to return to the relief role that he had been so comfortable in during his college career. Holder did not disappoint. In fact, his 2016 numbers were so good that the Yankees opted to give Holder a taste of the majors.

Known for his ridiculously good command, Holder has all the components of an above average major league relief pitcher. Holder may not be a fireballer, but he consistently reaches the mid 90s. One of the most attractive trends over Holder's college and minor league career is the fact that he doesn't walk people. He just doesn't. Okay, maybe he does every now and then, but the point should be well taken. As frustrating as some Yankees pitchers have been with command over the years, COUGH Dellin Betances COUGH, it would be nice to have someone who can throw strikes when needed. Holder is shaping up to be that guy.

Holder has quickly risen through the Yankees system over the last two years. The young right hander spent most of the 2015 season with Single-A Tampa, putting together a 7-5 record to couple with an impressive 2.44 ERA. In 103.1 innings, Holder struck out 78 and only walked 21. The next season would prove to be transformative for Holder, as he worked his way up the minor league hierarchy. After two scoreless outings with Single-A Tampa, the Yankees promoted Holder to Double-A Trenton, where he struck out 59 batters in 41 innings pitched. These numbers were impossible for the Yankees brass to ignore.

After 28 games in Double-A, the Bombers promoted Holder for the second time. With Triple-A Scranton Wilkes-Barre, Holder got even better. The youngster compiled 35 strikeouts in 20.1 innings pitched. In his 12 outings, Holder had an Andrew Miller-like 0.89 ERA.

In September, with the bullpen gassed and the Yankees looking for options, the team decided to give Holder a shot at the major league level. Unsurprisingly, Holder could not continue his dominant pace against such an elevated level of competition. In 8.1 innings stretched over eight games, Holder had a 5.40 ERA. While things certainly could have gone better for the rookie, the exposure will serve him well as he seeks to return to the majors. After getting a taste of what it's like to pitch at the highest level, Holder is eager to return.

Though Holder absolutely obliterated the competition in Double and Triple-A last season, his short stint in the major leagues showed that he still has some room for improvement. He will likely begin the year in Triple-A, but Holder can still compete for a bullpen spot. Barring injury, Aroldis Chapman, Dellin Betances, Tyler Clippard, Adam Warren are the only locks for bullpen spots. Holder has an opportunity to sneak his way on to the roster.

Bryan Mitchell, Luis Severino, Chad Green, and Luis Cessa will be competing for two spots in the starting rotation. Whichever two do not win spots, will likely end up the bullpen, leaving one open spot that will probably go to either Chasen Shreve or Tommy Layne. That said, if Holder can match, or even come close, to the numbers he put up in the minors last season come spring training, it will be difficult for the Yankees to not give him a roster spot.

Heading into 2017, Holder has the potential to provide the Yankees with some reliable innings in middle relief. Though I don't expect him to make the roster out of spring training, he will very likely end up in the Bronx at some point in 2017. His ability to consistently get hitters out, as he showcased in the minor leagues, is very valuable if it can be translated to the major league level. Holder is only 23 years old so he has plenty of time to develop in the minors, but I'm confident he has what it takes to make a difference in 2017. Don't be surprised if come June or July, Holder is "holden" down the sixth and seventh innings for the Bombers, helping solidify the bridge to Clippard, Betances, and Chapman.