By Unknown - February 15, 2017
When the Yankees announced the signing of first baseman Chris Carter to a one year, three million dollar deal, many around baseball were shocked. The fact that Carter, the National League home run leader, could do no better than what many reserves are paid is quite astonishing. As Yankees fans, we should be ecstatic about this move. Carter provides the Yankees with some much needed power from the right hand side. First base is in all likelihood still Greg Bird's position to lose, but a little friendly competition is never a bad thing. In 2017, Carter will likely see most of his at bats at either first base or designated hitter. In any event, having a 40 home run player coming off the bench is a very valuable asset, one the Yankees have been missing for quite some time. 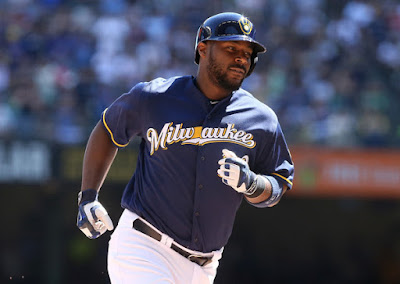 Chris Carter showcased both durability and power for the Milwaukee Brewers last season. In 160 games, Carter hit a National League high 41 home runs, to pair with 94 RBIs. In an era that seems to be bereft of power, Carter's stat line begs to differ. Of course, there are some downsides to the aforementioned statistics. In most cases, players who hit for great power tend to strike out quite often. Carter is no exception to this general observation. Unsurprisingly, Carter also led the NL with 206 strikeouts in 502 at bats, while hitting a measly .222. In an era of baseball that has become increasingly dominated by pitching and defense, reliable power hitters, like Carter, are hard to come by.

The Brewers finished the 2016 season in fourth place in the National League Central division, with a 73-89 record. Coupling Carter's alarmingly high strike out rate with his home run total might lead a neutral observer to believe he was simply attempting to pad his statistics during the season in an attempt to earn a hefty pay day. Needless to say, if this was Carter's motivation, he failed desperately. Last season was not an anomaly for Carter. The veteran has had over 15 home runs in every season dating back to 2012. For the last five years, in chronological order, Carter's home run totals have been as follows: 16, 29, 37, 24, and 41. This establishes a reliable track record. Carter has played more than 120 games in every season dating back to 2013, so I fear the adjustment to a platoon player may have an adverse impact on his statistics.

For a Yankees team that has become increasingly dominated by youngsters, Carter's veteran presence is a welcome development. Knowing that the Yankees have a contingency plan in the event Bird does not become the player the organization is anticipating he will develop into is comforting. Though Carter's right handed bat balances out Bird's left handed bat, the latter will still get the majority of the at bats from the first base position. The Yankees are a team in transition who happen to also be in a good position to make a run at a wild card spot. The Bombers would be foolish to jeopardize their primary goal: giving the "Baby Bombers" an opportunity to play.

One player who may be adversely impacted by the move is Tyler Austin. In spring training, Austin was supposed to compete with Bird for the starting first base job. Austin has the ability to also play third base and both corner outfield positions, so he is still useful to the Bombers, but any at bats he may have gotten at first base have all but disappeared with the addition of Carter. The Yankees expect free agent addition Mat Holliday to be the every day DH. Like Carter, Holliday is a righty. Holliday does have quite an extensive injury history so should he end up on the disabled list, the Bombers have a more than competent replacement waiting in the wings.

In summation, the last minute signing of Chris Carter was an absolute steal for the New York Yankees. Paying the NL home run leader only three million dollars for a one season commitment to come off the bench is a desirable scenario. Hopefully, Bird and Holliday both perform to the best of their abilities, and Carter has to be nothing more than a valuable asset off the bench. In the event of a setback, however, I'm happy that GM Brian Cashman made this move. Due to the significant decrease in playing time that Carter will likely see, his numbers will take a hit. I'm expecting to see Carter hit around 20 home runs to couple with 50-or so RBIs. If he can hover around .240, the Yankees should be happy, but .230 may be a more realistic expectation.