By Unknown - February 17, 2017
I’ve written many times that the Yankees greatest strength is their stout bullpen, while possibly their biggest weakness is the starting rotation. Brian Cashman’s decision to not add a veteran arm to the rotation only further validates this statement as we inch closer to spring training. Within the starting rotation, the big question marks come at the backend. Currently it seems two of the rotation spots will be filled, one way or another, by Adam Warren, Bryan Mitchell, Luis Severino, and Luis Cessa. The latter of that group, Cessa, only converted to pitching in 2011 by our cross-town rivals the New York Mets. 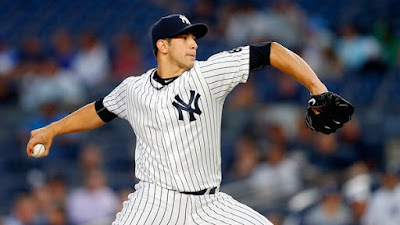 Cessa's strength relies in his fastball, which sits in the mid-90's, while his weakness lies in his secondary pitches, in regards to both control and movement.  You could also say his greatest weakness is his inexperience. Again, only having pitched professionally for about five years puts him at a grave disadvantage against almost every other player at his level. He is still developing those secondary pitches and learning the intricacies of pitching at the major league level. His 2016 season showed a solid step forward for Cessa and featured enough bright spots to earn him the right to be considered a player to watch going into 2017.

Cessa’s impressive season started in spring training where he allowed only three runs in 10 innings pitched. This caught the eye of the Yankees brass and also landed him on the opening day roster. After working out of the bullpen for only two innings and one appearance, the Yankees sent him down to AAA, so he would get more work and refine those secondary pitches we spoke about earlier. He shuffled back and forth between New York and Scranton throughout the season when the Yankees were in need of bullpen depth. During the stretch he pitched well in AAA to the tune of a 3.03 ERA in 14 starts and one relief appearance. Then the mass exodus of Yankee starters happened and the youth takeover began.

Cessa had earned the right to be part of the youth movement. Cessa finished the year with a 4.35 era over 70+ innings pitched for the big club. This included nine starts and six relief appearances. If you dive deeper into those numbers, Cessa pitched even better than what you see on paper. First off, his ERA as a starter was just above four at 4.01. Second, Cessa went five or more innings in each of those nine starts. That type of length from a young starter is important and proved that he was able to eat innings for the Yanks. Furthermore, Cessa allowed more than three runs only twice in those nine starts. If you take those two starts away, you’re looking at some lights out stats. All in all, Cessa was solid, helping keep the Yankees in contention, all while gaining extremely valuable experience for his future. His greatest feat in 2016 may have been the development of pitch repertoire. He proved he was able to get outs at the major league level and showed confidence in how he used his secondary pitches

I’m currently putting my money on Cessa to win a spot in the starting rotation out of spring training. Green and Mitchell both have higher long-term upsides than Cessa, but the latter is more seasoned right now. Cessa has worked a lot on his pitch repertoire and can confidently say he sports four pitches that he can throw for strikes (four seam fastball, curveball, changeup, slider). Cessa is also extremely efficient. He throws strikes and has shown he can eat innings and help rest the Yankees bullpen when they need a break. His 14.7 pitches per inning, 3.67 pitches per batter, and 4.9% walk rate are tremendous.

Cessa's efficiency may also be his undoing. He gave up a ton of home runs last year, almost two per nine innings, and everyone knows that’s an issue in Yankee stadium. This could possibly be attributed to Cessa still learning how to pitch at the major league level. Eleven of the sixteen home runs Cessa gave up were four-seam fastballs down the middle of the plate. Clearly, four seam fastballs down the middle are not something you can “sneak by” major league hitters, unless your name is Aroldis Chapman. Cessa still has a lot to learn, but his upside is certainly interesting. Whether it’s out of the pen or in the starting rotation, be ready to see a lot of him in 2017.