Random thoughts with spring training on the horizon

By Unknown - February 02, 2017
Spring training is less than two weeks away, but I need baseball now. My football team got embarrassed in the playoffs and then their best player punched a hole in the wall, my basketball team is enduring over a decade of futility with no light at the end of the tunnel, and my hockey team’s all world goalie is suddenly playing like a middle aged man at his local YMCA during open skate. I repeat I need baseball now. You can understand that even though the season isn’t here, I’ve been thinking about it, a lot. Here are a few random thoughts as we dream of spring training. 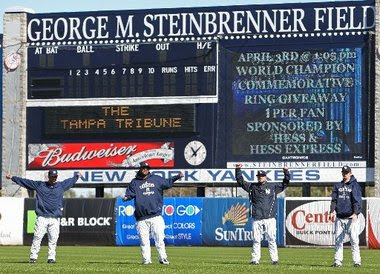 Luis Severino is the biggest variable on the roster

The Yankees biggest strength is the backend of their pitching staff. Unfortunately, their biggest weakness is probably the front end of it. For better or for worse, there won’t be many surprises from the trio of Masahiro Tanaka, C.C. Sabathia, and Michael Pineda. Between the tandem of Bryan Mitchell, Chad Green, and Luis Cessa the Yanks should be able to piece together a fifth starter. Leaving the role of a middle rotation starter wide open.

I am still perplexed at this point as to why the Yankees haven’t brought in a veteran to at least compete for this spot, but that’s neither here nor there. As of now that third or fourth starter spot is Luis Severino’s to lose. Lets just pretend last year was an extreme case of the sophomore slump. Do we remember his pretty impressive debut in 2015 that included an era of 2.89 and a whip of 1.23? If he can even come close to being that player the Yankees rotation all of the sudden doesn’t look so bad. A one-two punch of Tanaka and 2015 Severino is as good as any in the league. If Severino doesn’t come back to form we could be selling again, this time long before the trade deadline. I can see a solid starter coming out of the Green, Mitchell, and Cessa combination, but its hard to hope for two starters coming out of that group.

How the hell did we pay Chase Headley $52 million?

Headley has become the poster child for fan hatred in New York and don’t get it twisted, this certainly includes me, but I like to give everyone the benefit of the doubt before completely writing them off. With that being saidm I took a look into Headley’s stats over the past few years and I’m even more perplexed with his signing. Anyone who has read my stuff in the past knows I’m a huge Cashman guy. I believe he’s great at getting value where others don’t. But this move has to be one of his worst. Headley once hit 31 homeruns and batted .286. That was FIVE years ago. He since hasn’t hit above .263 or hit more than 13 homeruns. On top of that his defense has been mediocre. This contract is a dumpster fire. I’d trade him for nothing and let the youngsters platoon at third base.

A ton of people killed the Yanks for signing Matt Holliday in the off-season and rightfully so. No one wants to see a one-year deal for an aging slugger when you have the likes of Edwin Encarnacion on the open market. I’m going to spin zone this signing for you really quick. First off, Holliday looks like a man possessed this off-season. Has anyone seen pictures of him? He looks absolutely shredded and certainly does not look his age. He is known for his fierce competitive nature and has even been called arrogant at times throughout his career because of his confidence. You can’t tell me he isn’t looking to bounce back in a big way after two injury-plagued seasons. His biggest issue has been staying healthy and moving to the American League and the DH spot can help him do that. After all, we are talking about a career .300 hitter and 7-time all-star here. The other side of this signing is what it means for the Yankees future. Hopefully, Holliday is a stopgap until the ridiculous free agent class of 2019. Why sign a guy like Enarnacion, who would be yet another disaster long term contract for an aging star, instead of wait and sign a mid 20’s all star in 2019. If Holliday can get back to his old ways, while keeping the Yankees bank account stocked for 2019 we have yet another homerun (no pun intended) by Cashman.

If teams come looking for middle infielders, the Yankees should listen

Let me clear that Didi Gregorius and Starlin Castro are two guys I really like. Gregorius filled an impossible role and has gotten better every year. Castro has great chemistry with Gregorius and gives us solid production out of a position that has troubled the Yankees for the past handful of years. I also love the youth movement and how the Yanks have stockpiled prospects. With this all being said, the Yankees now have 4 players battling for 2 positions. Jorge Mateo and Gleyber Torres are not far from crashing the big league party so it may be time for the Yankees to get some value out of one or more of these guys. There are a bunch of sides to this coin. I currently don’t have a firm stance as to who should go and who should stay, but I do think this is a reality we need to start thinking about, and it may become the center piece of another trade deadline blockbuster deal if the Yankees fall out of contention by then. Gun to my head, I’d pray Castro has a great first half. The Bombers could then sell him to the highest bidder or include one of the shortstops in a big package to bring back a front line pitcher (i.e. Chris Sale deal). If your argument is that one of them can play third base, then just include Miguel Andujar in this mix and it’s the same issue.

I hate the combination of Gardner and Ellsbury

Truth be told I hate having them both on the same team, let alone the same lineup. It’s hard to blame Cashman for the Ellsbury contract. I too dreamt of what his lefty swing and speed could be like in Yankee stadium, but needless to say he’s been a complete bust. Mediocre stats and has an issue staying on the field. Brett Gardner is essentially the opposite. He has a team friendly deal and is a grinder that everyone roots for. Unfortunately, Gardner would be the one who needs to go in order to break them up because of the contract situation. Regardless, they’re just too similar to have them in the same lineup. I’m not a huge stat guy, but when two of your three outfielders combine for 16 home runs, that is not a good thing. It would be much different if one of them was batting .330 or hitting 25 home runs, but they’re not. They are both the same one-dimensional contact hitters who rely on their speed to get on base. As long as they’re both in the same lineup the Yankees lineup is not going to be as potent as it should be. The Yankees play in a launching pad and should be taking advantage of it.