By Unknown - March 20, 2017
Cue the World Baseball Classic haters. It seems they may have a case, at least in regards to player injuries. Rising star shortstop Didi Gregorius has just left his team, the Netherlands, to return to the Yankees facility in Tampa, Florida for further testing on a right shoulder injury. When or how he suffered the injury seems to be unknown. The preliminary MRI show "hematoma of the subscapular muscle," a swelling and bruising in a muscle in the lower part of the shoulder blade. I’m no doctor, so naturally I have no idea of the severity of those results, but this is certainly terrible news. No injuries are welcome, but shoulder injuries are extremely alarming, especially when it is the throwing shoulder (which it is). 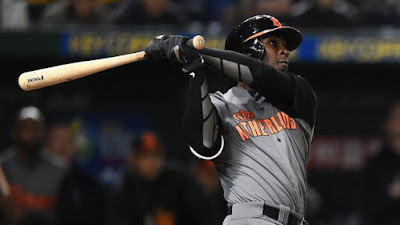 I’ve gone on record many times saying Gregorius is the single most important player on this team. Yes, I know how ridiculously good Gary Sanchez is going to be. I also know that outside of Mashairo Tanaka the Yankees rotation is a potential dumpster fire. But I still think Didi is our most important player for a handful of reasons. First and probably most arbitrary, I can’t count how many times last year Didi shortened innings with his stellar defense. It seemed like it was almost once a game where he would make a crucial play that would end up being a turning point of the game. It’s hard to quantify the importance of that anchor in the middle of the defense. At the plate, Didi has done nothing but improve since his first at bat in the Bronx. When everyone else struggled, Gregorius was Mr. Consistent, no matter where he was placed in the order.

Outside of how good Didi has been, he is also the toughest to lose because there isn’t much depth behind him. I don’t think I’m alone to say I wouldn’t feel comfortable having Ronald Torreyes as our everyday shortstop. If you are okay with Torreyes as the everyday shortstop, then we become even thinner in regards to infield depth while he starts. Yes, the Yankees are rich up the middle in prospects, but is it really ideal to rush one of these guys at this point in their career? I know fans will be calling for Jorge Mateo or Gleyber Torres, but if the Yankees don’t think they’re ready, then they’re probably not. Rushing along a prospect of that magnitude could have monumental repercussions if they struggle in the majors. Those repercussions could seriously damage the development of one of these young stars.

At this point, we can only hope Didi’s injury isn’t serious. In the meantime, I would expect the Yankees to experiment with shuffling Torreyes and Castro at shortstop. I also believe a solid stop gap could be promoting Tyler Wade from Double-A Trenton. Wade is a couple years older and more experienced than both Mateo and Torres. The Yankees have also been reportedly grooming him to be a Swiss army knife player in the mold of Ben Zobrist. This unfortunate situation could be a viable opportunity to see if Wade is capable of being that kind of player at the next level.