By Unknown - March 20, 2017
During his tenure in pinstripes, Adam Warren has proven himself to be quite versatile. Due to his experience in middle relief, long relief, and as a starter, the Yankees can feel confident placing Warren in a number of roles. Warren struggled profoundly after being dealt to the Chicago Cubs last offseason in the deal that brought Starlin Castro to the Bronx. His stint with the Cubs, however, would be short lived. After returning to the Bronx last July as part of the Aroldis Chapman trade, Warren seamlessly slid into the seventh inning role. This spring training, Warren is in the mix for one of two open rotation spots. Warren's versatility will likely hurt him in this competition. This season, Warren will probably work in middle relief, bridging the gap between the shaky rotation and the trio at the backend of the bullpen, which consists of Tyler Clippard, Dellin Betances, and Chapman. 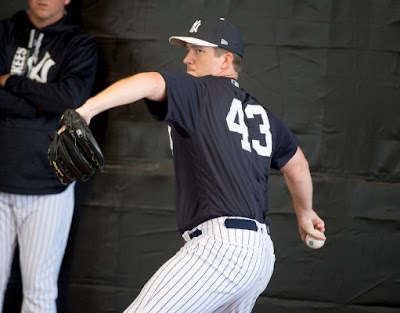 Last winter, the Yankees sent Warren, along with infielder Brendan Ryan, to the Cubs in exchange for second baseman Starlin Castro. Though Warren had been a reliable arm for the Bombers, bringing in Castro for such a modest asking price was a move Cashman would have been foolish to turn down. With the emergence of Addison Russell, it was clear that the Cubs were ready to move on from the then 25-year old Castro. In Warren, Chicago thought they were receiving a solid middle reliever capable of providing length, or making a spot start if needed.

As a member of the Cubs, Warren had trouble replicating the numbers he had consistently put up in the Bronx over the last few years. In 35 innings over the course of 29 games, Warren pitched to an alarmingly high 5.91 ERA. It was clear that the move to Chicago was not working out for Warren. With a World Series run in mind, the Cubs correctly made the bold move of acquiring Chapman from the Bombers to close out high leverage playoff games. The trade worked out perfectly for the Cubs, considering they were able to successfully snap their historic championship drought. In exchange for Chapman, the Cubs sent top prospect infielder Gleyber Torres, minor league outfielder Billy McKinney, and Warren back to the Bombers.

After returning the Yankees, Warren slid into the seventh inning role. At or around the trade deadline, the Yankees made the decision to sell off assets. Aside from Chapman, the Yankees also sent Andrew Miller to the Cleveland Indians. With Dellin Betances becoming the de facto closer for the duration of the season, the Yankees acquired Tyler Clippard from the Arizona Diamondbacks to serve as the new set up man. In 29 relief appearances, Warren pitched in 30.1 innings, allowing 28 hits, 10 walks, and striking out 25, all while putting up a 3.29 ERA. By rebounding from his struggles with the Cubs, Warren proved that he can continue to be an asset moving forward, just as he had been for the Yankees since 2013.

Warren's role in 2017 is yet to be determined. As of now, Warren is competing with Chad Green, Luis Severino, Bryan Mitchell, and Luis Cessa for two open rotation spots. Warren's proven ability to pitch key middle relief innings at the major league level will likely work against him as the Bombers are deciding how to assemble their rotation. Barring an absolutely exceptional end to his spring training, it would be hard to imagine Warren being awarded a rotation spot.

More realistically, we should expect to see Warren come out of the bullpen in a middle relief role. With the seventh, eighth, and ninth innings locked down by Clippard, Betances, and Chapman, respectively, Warren should bridge the gap between the shaky rotation and the aforementioned studs. Don't be surprised if Warren is called on to make a spot start or two for the Bombers as well. Should an injury arise in the rotation, and the Yankees are looking for a short term answer, Warren will likely be one of the first players called on to fill the needed void.

Adam Warren has proven that he has what it takes to perform well in a number of capacities. Starting the season with the Yankees, an organization he is clearly comfortable with, will serve Warren well as the team gears up for the start of the 2017 regular season. His role has not been officially announced, but I'd be shocked to see him end up anywhere but the bullpen. Though pitching in middle relief isn't as flashy as closing out games, it is just as important. On any given night, the likes of Michael Pineda or CC Sabathia, for example, may struggle to last more than five innings. This is why Warren is so important. Warren's success in locking down these few innings could conceivably determine the outcome of quite a few games this season.