By Unknown - March 10, 2017
Bryan Mitchell, still just 25 years of age, is coming off a forgettable 2016 season and will look to overtake several other arms to earn a starting rotation spot or possibly a long-relief role in the bullpen. 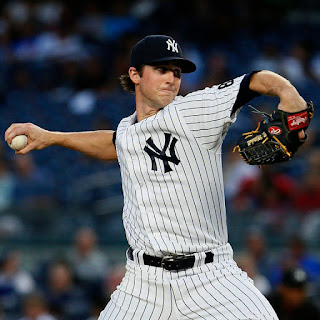 Mitchell had a rough, and injury shortened 2016 season. As many may remember, Mitchell broke his toe in Spring Training fielding a ground ball, causing him to miss extended time after a very strong spring. He then spent the rest of the season trying to recover from the incident, but did not make a large impact. Mitchell was seen as a versatile arm for the Yankees and still should be despite his absent 2016 season. His limited sample size did provide optimism though, as in five starts, which ended up being 25 innings, Mitchell pitched to a successful 3.24 ERA. His injury surely didn’t help, but Mitchell's versatility could still be used by this team over the unsuccessful bullpen guys.

Mitchell's injury set him back in the pitching system of the Yankees. Betances, Warren, Clippard, and Chapman are all locks for the bullpen, along with Sabathia, Tanaka, and Pineda being locks in the rotation. That only leaves two rotation spots and three to four bullpen positions. Thing is, there’s several guys vying for these spots. The main candidates for the rotation are Luis Severino, Chad Green, Luis Cessa, and likely Mitchell.

Then there's also youngsters that have yet to make their Yankee debuts, but should be expected to contribute at some point in the near future. These include Chance Adams, Dietrich Enns, Jordan Montgomery, Justus Sheffield and James Kaprielian, as all are coming off fantastic minor league seasons. Mitchell is also coming off his first start of the spring, one that definitely hurt his chances in the rotation. Not only did he struggle, but his competitors all had good first outings. So, with his injury setback and plenty other arms on the rise in the farm system, Mitchell will likely not be anything more than a fill-in starter or a typical rotational bullpen guy for the Yankees in 2017.