By Unknown - March 07, 2017
Jorge Mateo is a 21 year-old shortstop from Santo Domingo, Dominican Republic. The Yankees signed Mateo as an international free agent in 2012. Mateo is a speedster who led all minor leaguers in stolen bases in 2015 with 82. Mateo was ranked the Yankees #3 prospect after the 2014 season and the #1 prospect after the 2015 season. He was considered the #26 prospect in all of baseball following the 2015 season. 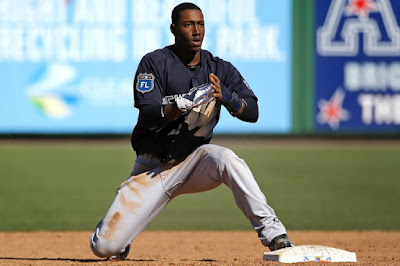 Mateo is coming off of an up and down year. He started off the season with possibly his best month of baseball ever, hitting .374 in his first 27 games. From then on he hit only .218, to finish up with a .254 average for the year. Mateo’s average wasn’t horrible and with 8 home runs, he showed more power than ever. But he saw his stock plummet, as he went down in every expert’s prospect rankings from the previous year. There are a few reasons that you can pin this fall on. First off, Mateo did not take the next step at the plate. Last season saw too many poor at bats and weakly hit balls. Again, Mateo did increase his power numbers in regards to home runs, but only 29% of his 118 hits went for extra bases. These numbers show a stalemate in his development at the plate and his overall offensive approach.

This past season also saw a decline in Mateo’s defense and stolen bases. While Mateo’s fielding percentage improved from 2015, it still sat at a disappointing .937, for a player who was previously touted for his strong defensive prowess. His stolen bases declined by more than half, going from 82 to 36. Mateo’s biggest issue may not have even been on the field. He was suspended two weeks and forced to miss the futures all-star game after breaking a team rule in July.

If Mateo wants to become a star on the next level, his game needs to mature both on and off the field. His speed rates at an 80, which is the top of the scale. He also has the tools to be an above average, to excellent defender at the major league level. His biggest issue is increasing the number of “hard hit” balls and not giving away at-bats. At this point it is a matter of Mateo putting in the time and effort to take this next step.

The tools and physicality is clearly there, it’s now time to grow up and put it all together. He showed flashes of the player he could be in 2015 and into the first month of 2016. I suspect 2017 is a make or break year for Mateo, as the Yankees will need to make decision on whether he is a part of their future or a trade piece. With Castro and Gregorius set up the middle, I wouldn’t expect them to rush his development, but I think the plan for Mateo will be clear by mid year. You can’t teach the tools Mateo possesses; only time will tell if he will use those to his advantage.