By Unknown - March 09, 2017
Perhaps no Yankee is as frustrating as the 28-year old Michael Pineda. Ever since his highly anticipated arrival to the Bronx in 2012, Pineda has been a colossal letdown. Despite occasional flashes of brilliance, Pineda has consistently failed to put it together. Many talent evaluators around the league will agree that the right hander has some of the best "stuff," in the league; however, that has not translated into major league success. With free agency around the corner for Pineda, the Yankees can only hope he is motivated to cash in big next offseason. If Pineda can finally figure it out this season, and revert back to his 2011 Mariners form, he, along with Masahiro Tanaka, will constitute a formidable 1-2 punch at the top of the rotation. Suffice it say, expecting Pineda to miraculously turn it around is a bit naive, but the Bombers can only hope for the best. 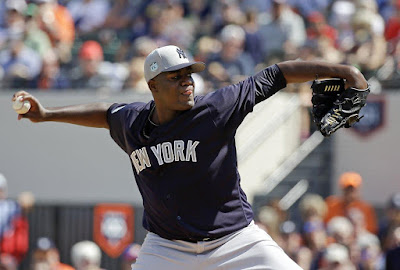 Pineda saw yet another subpar season in 2016. In 32 starts, the right hander went 6-12, with a 4.82 ERA. Alarmingly, he gave up 27 home runs in those starts. He did, however, strike out 207 batters in only 175.2 innings of work. The latter statistics indicate that Pineda has the talent to get the job done at the big league level. I have written many articles on Pineda here at the BBB, consistently opining that he has some sort of mental disorder. It is the only explanation for the uncanny struggles that have plagued Pineda for his entire career.

When the Yankees acquired Pineda following the 2011 season for then-top prospect Jesus Montero, Brian Cashman thought he had brought in a young ace who was poised to lead the rotation for years to come. Fortunately for the Yankees, Montero has turned out to be a complete and utter bust. Pineda has certainly been underwhelming during his time in the Bronx, but the Yankees are the clear winners of this trade. Pineda's first three seasons in pinstripes were consumed by injuries. In 2014, Pineda put up a 1.89 ERA in 13 starts, giving the Yankees a glimpse of the pitcher they believed they had acquired following his impressive rookie season.

The 2015 season was full of ups and downs for Pineda. Highlighted by a mesmerizing Mothers Day performance in which he struck out 16 batters in seven innings of work, it appeared that Pineda had finally figured out his groove early on. It turns out that this outing was an anomaly. Soon after, Pineda began exhibiting the erratic tendencies that came to define his 2016 season. There are really no patterns that can be used to dissect Pineda's 2016 performance. In some starts, he was very good. In some, he was abominable. As the overall statistic line indicates, he was abominable more than he was good. In summation, 2016 was a major set back for the 28-year old right hander.

Heading into 2017, the Yankees will be relying on Pineda to be a major component of an already shaky rotation. Aside from ace Masahiro Tanaka, the Yankees starting staff is full of question marks. Though veteran CC Sabathia made some important adjustments to vastly improve on his 2014 and 2015 struggles last season, he's still another year older with more innings on his arm. Chad Green, Luis Cessa, Luis Severino, and Bryan Mitchell are expected to compete for the final two spots. With Tanaka looking like the only sure thing as far as the rotation is concerned, it is imperative that Pineda can evolve into the number two pitcher he is capable of being.

It appears that Pineda's extensive injury history is behind him. The right hander got through the 2015 and 2016 seasons relatively healthy so the biggest concern at this point in consistency. Right now, it is all mental for Pineda. This will be Pineda's sixth season with the Yankees organization. I'm astonished that they still haven't figured out what's wrong with him. Whatever Larry Rothschild and the coaching staff is trying has not worked. Perhaps a sports psychologist might be the next course of action?

Baseball is a business. Most, if not all, players are in it for the money. Pineda is entering a contract year. His impending free agency should provide all the motivation in the world for a comeback season. Even if Pineda can figure it out, I'd strongly advise the Yankees to let him walk away, and never return. The Yankees hope to compete for a wild card spot in 2017. They cannot do that unless they have two to three reliable starting pitchers. Unfortunately for the Bombers, it appears that their fate is partially tied to Pineda. If the erratic right hander can't improve upon his 2016 performance, it's hard to see the Yankees realistically competing for very long.