By Unknown - March 01, 2017
In one of Brian Cashman's lesser known moves prior to the 2016 season, the Yankees' General Manager traded second base prospect Jose Pirela to the San Diego Padres for young minor league pitcher Ronald Herrera. 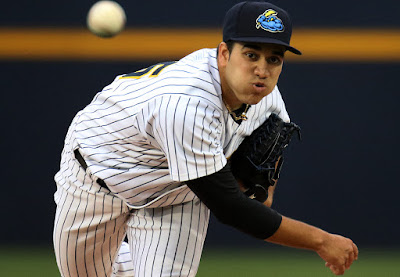 
Herrera is currently listed at 5'11" and 185 pounds and hails from Venezuela.  He is a hard throwing right hander who, despite being only 21 years of age, has already received rave review from scouts as well as Brian Cashman himself. One such scout has been quoted as saying this about Herrera:

"He is a medium-body right-hander who looks generic as hell. The stuff is not overpowering, but the pitchability and command are both so good. He is so poised, especially for his age. I love his makeup. I love how he mixes pitches. He is a big-league starting pitcher."

The Venezuelan righty has already seen his fastball reach the 94-95 MPH range and MLB.com's Jonathan Mayo has already commented that he offers a strong curveball as well.  The tools are there for this kid to develop into a difference maker of the next few years.

Herrera has already suffered an injury (shoulder inflammation) in camp this spring, so it might be another two-to-three weeks until he returns to action, but the Yankees are keeping their eye on this young hurler.

Ronald Herrera made 24 total starts in the minors last season – 23 starts at Double-A Trenton as well as one spot start at Triple-A Scranton/Wilkes-Barre – and for the most part, was quite effective.  Across his 23 starts in Trenton, Herrera went 10-7 with a respectable 3.75 ERA.  He also racked up nearly a strikeout per inning, tallying 131 Ks over 137.0 innings pitched.

Most notably from last season was his start on April 26th against the Double-A affiliate of the Blue Jays, the New Hampshire Fisher Cats. Holding the Fisher Cats to only two walks and one hit batsman, Herrera threw eight shutout innings with five strikeouts as part of a combined no hitter with Thunder closer Jonathan Holder, who came on in relief in the ninth inning.

Herrera's 2016 numbers won't exactly jump off the page, but he has already shown he has the stuff to succeed and we should expect his climb through the system to continue into this season.

While Yankees fans shouldn't expect to see Herrera in pinstripes this season, his age-22 (turns 22 in May) season is still one worth watching to see if he can continue his ascent through the Yankees' farm system and push his way towards making the big league club in 2018 and beyond.  I would expect Herrera to start this year with the Triple-A Scranton/Wilkes-Barre RailRiders as many of their top arms from last year have strong chances of making the Major League Roster next month.

If Herrera can recover from his current shoulder inflammation by the time the minor league season starts and build upon the success he had in 2016, he should be a key cog in the 2017 RailRiders' rotation, putting himself in position to factor into the 2018 Yankee roster, either as a bullpen arm, or perhaps a 4th or 5th starter.