By Unknown - March 11, 2017
Like many of you reading this piece, I knew little about Yefrey Ramirez before writing this brief profile on him. For this reason alone, I strongly encourage you to keep reading and learn a little bit about a player many of you did not know was on the Yankees 40-man roster. Ramirez is a converted infielder, and current minor league starting pitcher who has flown under the radar since his arrival to the Yankees organization following the 2015 season as a minor league Rule-5 draft pick. Progressing from a minor league Rule-5 draft pick to earning a spot on the New York Yankees 40-man roster is no easy feat so it's worth exploring how he Ramirez was able to do so. 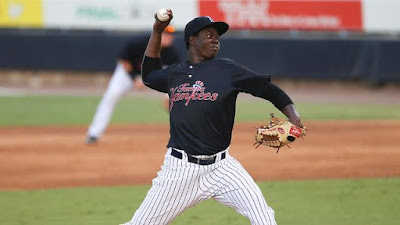 The young Dominican pitcher split the 2016 season between Charleston and Tampa. Ramirez began the year with the Low-A Charleston Riverdogs. In 11 starts, Ramirez went 4-2, while putting up a 2.80 ERA. Surrendering only 48 hits in 61 innings of work, while also striking out 66, Ramirez quickly caught the eyes of the Yankees player development staff. The Bombers subsequently promoted the young right hander to High-A Tampa, where he continued to excel. Ramirez's 11 starts with Tampa were just as impressive as his those he made with Charleston. The 3-7 record that Ramirez finished with is quite misleading of his overall performance. In 63.1 innings of pitching to a 2.84 ERA, Ramirez gave up 34 hits, struck out another 66, and walked a mere 18.

One game stands out more than all others for Ramirez. In mid August, Ramirez took a perfect game into the seventh inning and a no hitter into the eighth. Ramirez exited the game after striking out eight and only allowing one hit in eight innings of work. In an MiLB.com piece, Robert Emrich noted that Ramirez appeared as if, "he was in a whole other world." Overall, 2016 was a huge breakthrough for young Yefrey Ramirez. Shattering the hopes that the Yankees organization had set for him, Ramirez proved that he was worthy of a spot on the 40-man roster entering the 2017 season.

Ramirez will likely begin the 2017 season with Double-A Trenton. Although he is listed on the Yankees 40-man roster, the Yankees probably will not call up Ramirez unless the situation turns dire. This will be a crucial season for the 22-year old. Though he transitioned well from Low-A to High-A, the competition in Trenton will be unlike any he has seen during his professional career. Should Ramirez replicate the numbers he put up last season, he could conceivably work his way up to Triple-A Scranton Wilkes-Barre.

I knew nothing about Ramirez prior to writing this brief article, but I must say that everything I've read/seen about the guy has impressed me. Even more so, he has done this while maintaining a low profile, perhaps being overshadowed by the Baby Bombers already in the majors, or on the verge of making it there. If he continues to perform as well as he did in 2016, we could very well see Ramirez in the Bronx this season as a September call-up.