By Unknown - March 30, 2017
This Thursday, March 30, the Yankees made three big announcements pertaining to the 2017 opening day roster, thus settling most of the spring training competitions. Luis Severino has been named the fourth starter, while Aaron Judge has been announced as the opening day right fielder. Both of these decisions are steps forward in the right direction. The Yankees are counting on Severino and Judge to be big parts of their future moving forward. Now that both players have been given the opportunity to shine, the burden falls on them to showcase their talents for a sustained period at the major league level. The Bombers have also announced their opening day bullpen, which will consist of, Aroldis Chapman, Dellin Betances, Tyler Clippard, Adam Warren, Tommy Layne, Jonathan Holder, Chasen Shreve, and Bryan Mitchell. 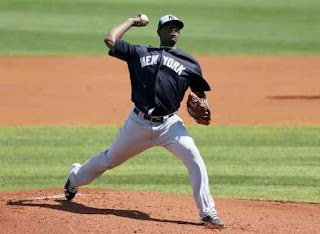 Joe Girardi has already announced that he will not name a fifth starter until mid-April. Since it has already been determined that Adam Warren will be pitching for the Yankees out of the bullpen this season, that narrows down the fifth starter competition to Bryan Mitchell and Jordan Montgomery. Mitchell, who has earned a spot in the opening day bullpen, would be a logical choice to fill the void when it comes up, but this will largely hinge on his usage out of the pen. Based on spring training numbers alone, the advantage should go to Montgomery; however, the Yankees have shown that they really like Mitchell, who does have MLB experience on his side

Luis Severino entered spring training this year with a chip on his shoulder. After being awarded a rotation spot out of spring training last season, Severino struggled immensely. Following a major league return after an injury and minor league demotion, Severino excelled in a relief role. This made many wonder whether his future would be out of the bullpen. Today's decision clearly shows that the Yankees think otherwise. In five spring training games, three of which were starts, Severino went 2-0 with a 3.95 ERA, giving up 12 hits in 13.2 innings, while striking out 16 and walking five. These numbers do not jump off the page, but they are respectable enough to merit his return to the rotation. This year will be big for Severino. Let's hope he can finally figure it out as a starter, and revert back to what he was following his late summer call up in 2015. 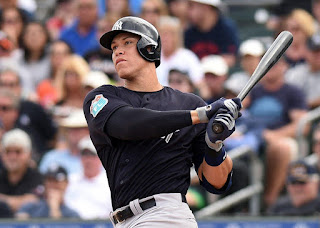 Thankfully, the Yankees opted to name Aaron Judge, and not Girardi-man crush Aaron Hicks, as their opening day right fielder. Judge is the future of this organization, Hicks is not. Judge made quite an impression after being called up to the majors last August. Hitting a home run in his first MLB at bat surely caught the attention of many around the league, but he proceeded to strike out at an alarmingly high rate, leading the Yankees to wonder if he was ready for prime time. This spring, Judge has risen to the occasion. In 58 at bats, Judge hit .345 with three home runs, six RBIs, a .975 OPS, and most importantly, only 13 strikeouts.

The opening day bullpen is not too much of a surprise. Chapman, Betances, Clippard, and Warren were automatic locks. It is a bit of a surprise, however, that the Yankees opted to carry two lefties, in Layne and Shreve. Holder and Mitchell will help share the middle relief duties, though Mitchell may be headed to rotation as the fifth starter so this is something to watch. Needless to say, we should expect to see the infamous "Scranton Shuttle" in full force yet again this season. The Yankees have shown that they love to bring up fresh bullpen arms when they can, so there's no reason to think this won't occur in 2017.

The Yankees made three important decisions about the 2017 roster today that will go a long way towards determining the franchise's future. Severino and Judge are part of the youth movement. Along with Gary Sanchez, Greg Bird, and the other Baby Bombers to follow, these players will be counted on to usher in the next Yankees dynasty. That said, the expectations shouldn't be set too high for these two this season. Break out years would be great, but improvements from 2016 will be the main measure of success. The only question remaining now is for the fifth rotation spot. Nonetheless, we will know soon enough.