2017 should be Tanaka's last season in pinstripes

By Unknown - April 09, 2017
At the conclusion of the 2017 season, "ace" pitcher Masahiro Tanaka has the option to opt out of his current deal with the Yankees and become a free agent. Since arriving to the Bronx, Tanaka has been quite inconsistent. Though he's shown flashes of brilliance, he has been nowhere near the dominant pitcher he was in Japan. This was to be expected given the elevated level of competition present in the majors; however, he is not the ace he's being paid to be. The Yankees are paying Tanaka $22 million this season. This is already a gross overpay. If the Yankees were to give him a penny more than his 2017 salary, that would be a derogation of duty on Brian Cashman's part. The Yankees have two options: they can either let Tanaka walk at the end of the season, or trade him at the deadline, if he starts to perform like he did last season. I'd be in favor of either, as long as Tanaka is pitching for another team come 2018. 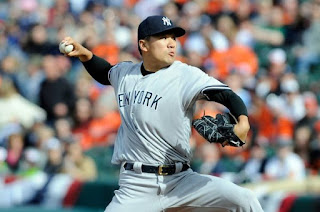 As most competent baseball analysts predicted, the Yankees starting rotation is shaping up to be an unmitigated disaster. Not until the sixth game of the season did a Yankees starter (CC Sabathia) last six innings. This is deeply troubling. Tanaka, as the supposed "ace" is supposed to be the one dependable starter on the team. Thus far, that has not been the case. Granted, it is still early, yet his two starts this season have not provided much reason for optimism. On opening day, Tanaka lasted just 2.2 innings against the Rays, giving up 7 runs and 8 hits. This past Saturday against the Orioles, during a game I had the misfortune of attending, Tanaka did last five innings; however, he labored, giving up five hits and three runs. There were moments in the game where Tanaka just looked flat out lazy, taking far too much time to field balls hit in his direction, further extending innings that should have been over much earlier.

All this ranting is good and well, but I digress. The bottom line is simple. If Tanaka opts out of his current contract with the Bombers, the team would be better off to let him leave. Tanaka has not pitched up to the expectations that come with a salary as high as his. I will admit that the Yankees probably do bring in a lot of revenue from Japanese fans due to Tanaka's stature in the country. On the field, though, Tanaka is not worth more than the $22 million he's being paid at the moment.

We're also forgetting that Tanaka might be a ticking time bomb. Just because he got through last year injury free does not mean he will stay healthy for the next couple of seasons. Choosing not to get Tommy John surgery two years back has proven to be a good decision on Tanaka's part, but who knows when his injury might resurface. I'd rather not invest in such an uncertainty. There are many other pitchers who free agents after 2017 (Jake Arrieta, Yu Darvish, and Johnny Cueto, just to name a few) and 2018 (Matt Harvey, Clayton Kershaw, Dallas Keuchel) that would be better long term investments than Tanaka. Heck, we could even bring back the legendary and ageless Bartolo Colon! Okay, I may be kidding about that last one.

Perhaps the better option might be to simply trade Tanaka. We should be under no illusion. The 2017 Yankees will not be a playoff team. It's painfully clear. They do not have the talent. I may be getting a bit ahead of myself, but the Bombers figure to be sellers again at the trade deadline, given that they have a number of pending free agents- CC Sabathia, Matt Holliday, Micheal Pineda, and of course, potentially Tanaka. The Japanese righty could be an appealing option for clubs in the thick of a playoff race. He may not be the ace we expected him to be, but he's still a more than serviceable starting pitcher. If Tanaka was made available, the Yankees would more than likely find a suitor. A pending free agent with star potential could yield the Bombers a nice return to further stack the number two farm system in the league.

It's still early April. There is plenty of baseball left to play. At this point, the Yankees have not given the organization or fanbase much reason for optimism.. The offense has been okay, and the bullpen has talent. The problem, however, is no team can ask its bullpen, no matter how dominant, to pitch four innings every night. The starters must provide more length. This starts with Tanaka. As the leader of the rotation, he has to give the Yankees more innings. Tanaka's first two starts this season have been disconcerting. He has been very hittable, and unable to get key outs. After being handed a 4-1 lead against the Orioles this Saturday, he struggled in the fifth inning before exiting with a 4-3 lead. Handing this narrow lead to an already overworked bullpen was a recipe for disaster.

Tanaka's 2018 status should not be at the top of the list of priorities for the New York Yankees. That said, it will be important as we get closer to July. If the Yankees are not realistically competing for a playoff spot, they should not hesitate to shop Tanaka. Whether the Yankees decide to trade Tanaka or hold onto him until the end of the season, he should not be the opening day starter in 2018. Tanaka is not an ace, and he does not deserve to be paid like one. His performance since arriving to the Bronx corroborates this assessment. Has he been good? Of course. Is he worth more than $22 million? Absolutely not! If Tanaka does not opt out, it will be because he had a bad year or is injured. Either of these scenarios would not be preferable for the Bombers. Hopefully the forward looking Yankees can avoid handing out a contract to another overpaid veteran, and make a wise decision on their supposed "ace" right hander.