A successful Aaron Judge is key to the Yankees' future

By Unknown - April 22, 2017
For anyone who has been watching the Yankees, Aaron Judge has to bring you some excitement. His towering homeruns will impress even the most modest of baseball fans, but how important is it for Judge to be a lasting force in the Yankees lineup? It’s everything. Judge fits the mold of how to succeed in New York. He is likeable, he says the right things, and he hits the ball really, really far. It may be early, but if Judge consistently plays to his potential, he will be the face of the Yankees for many years to come. 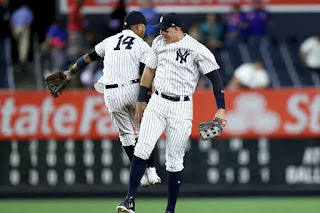 One of the things that stands out about Judge, is that he seems like a genuinely nice guy. Whenever the camera lands on him during the game, he seems to be smiling. This may seem like a minor thing, but when looking for the face of a franchise, it is a quality that people want to see. Think back to Derek Jeter, he was liked and respected by everybody, and not only because of his on-field performance, but because he seemed genuine and people believed him when he spoke. Other players, despite great numbers, are not as likeable. In recent history, we think of A-Rod, who despite providing endless entertainment, experienced a love-hate relationship with Yankee fans because he was flawed. Currently, players like Jacoby Ellsbury, Brett Gardner, and Chase Headley, despite being some of the biggest named veterans on the team, do not excite the fans or provide the “likeability factory.”

After the next Yankee game, watch Judge’s interaction with media. His approach will almost certainly impress you. He is calm, collected, and most importantly team-oriented. He understands the game is not only about himself, but the other 24 guys in the clubhouse. This should be a welcome sign to Yankee fans as it provides a very “Jeter-esque” feel. This is important because in the media market that is New York, players have been eaten alive. This pressure has not yet gotten to Judge, and if what we have seen so far is a glimpse into what we should expect, Yankee fans should not be concerned. 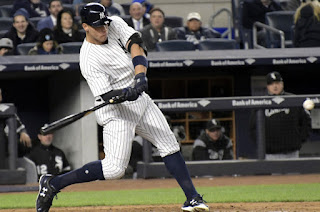 So now you’re saying, so what he is likeable? Who cares if he can talk to the media? That brings us to the last, most crucial step to success in New York, Judge can hit the ball really, really, REALLY far. The excitement factor: you either have it or you don’t, and Judge certainly has it. When Judge gets up to the plate fans expect something to happen. Judge may not be a guy who hits .300, but Yankee fans should expect him to provide big time power numbers, and if there is anything New Yorkers like more than a Derek Jeter siting, it’s a towering 450-foot homerun. In Judge’s very short big-league career, he has shown he will hit the ball a long way.


What does this mean? The Yankees should hope Judge will be around for a long time. He could be the model player for their future teams. Judge is what the Yankees want to have coming out of their farm system and shows fans that the front office is committed to the future. He has all the qualities to have a successful career in New York and if he hits the ball like he has been, the sky is the limit for this Baby Bomber.