Aaron Judge is off to the hot start everybody wanted

By Unknown - April 13, 2017
In the bottom of the seventh inning of Wednesday’s matinee against the Tampa Bay Rays, Aaron Judge hit his third home run in as many games. Through eight games, Judge is batting .308 with three home runs and seven RBIs. Early on in the campaign, the 6'7" right fielder has shown a propensity for producing clutch hits with exit velocities nearing 120 mph. 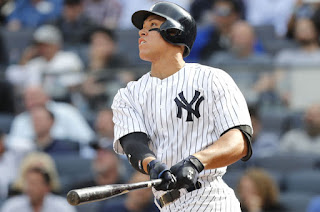 Judge is visibly more patient and confident at the plate than he was last year. Instead of swinging and missing, Judge is capitalizing on mistakes and laying off pitches out of the zone. In 2016, in just 84 at-bats, Judge had 42 strikeouts compared to only nine walks. That’s roughly four strikeouts for every walk, and one strikeout every two at-bats. At times Judge would go several games without walking, and struck out in 21 of his first 22 games. So far this year, albeit a much smaller sample size, Judge has six strikeouts to only three walks. If Judge can keep the strikeouts down and walk more often, his OBP will skyrocket and Joe Girardi will have no choice but to move him up in the lineup.

Although some fans will already be tempted to move Judge into the middle of the lineup because he is hitting over .300, Judge should probably remain in the bottom third for the time being. I would like to see at least two more weeks of consistent production before he moves up a couple of spots. He has to show he isn’t worth the risk of pitching around Matt Holliday before making him Holliday’s protection.

Situational hitting is very important at the MLB level, and Judge has performed well in the clutch so far this year. Judge hit a game-tying moonshot in Baltimore on Sunday, which gave the Yankees the momentum they needed for a comeback victory.  He did it again Wednesday when he almost took Jumbo Diaz’s head off with a game-tying line drive in the sixth inning. When Judge barrels the ball vicious contact is made. The aforementioned game-tying line drive came off his bat at 116 MPH! By cutting down on swings and misses, his rate of contact will go up. And if his rate of contact goes up, pitchers will need to keep their heads on a swivel if they want to keep their heads at all.

It will be very interesting to see how Judge fairs in the upcoming series against the St. Louis Cardinals. He will face two right-handed aces in Carlos Martinez and Adam Wainwright on Saturday and Sunday. Recently Judge has done most of his damage off of the other team’s bullpen. However, if Judge can make an impact in his first or second at-bat against the opposing team’s starting pitcher, that will set up the Yankees for success. Getting early leads is crucial for the Yankees to unleash their back end of the bullpen, while simultaneously getting to the weaker parts of opponents’ bullpens.

With Gary Sanchez out for the first month and Greg Bird off to a slow start, it is Aaron Judge’s time to shine. Right now the star is shining bright and it doesn’t seem like that will stop any time soon.