Attention National League: It's time for the DH!

By Unknown - April 24, 2017
Interleague play provides baseball fans with an opportunity to see their team face off against ball clubs in the opposing league that they rarely get the chance to see. As enjoyable as it is to see the Yankees face off against teams like the Pittsburgh Pirates, Chicago Cubs, and Cincinnati Reds this year, it is disconcerting to see one of the team's most potent bats removed from the lineup. As we witnessed in the recent series against the Pirates, the pitcher is almost always an automatic out, especially an AL pitcher. Though Bartolo Colon's at-bats, for example, are quite entertaining, the NL needs to adjust to the times, and incorporate the designated hitter (DH) position. There is no logical reason to continue having the pitcher hit, therefore its time to do away with this trivial rule. The traditional baseball purists need to get over it. 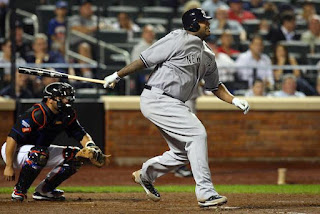 
Sometimes in life we are confronted with rules that are difficult to make sense of. No matter how hard we try to decipher the practical purpose behind these rules, we are left empty handed. The NL's refusal to incorporate the DH is one of these situations. Prior to the AL's adoption of the DH rule in 1973, there was no reason to question the logic behind the pitcher hitting. There were nine players on the field, and nine spots in the lineup. Simple enough. It made for an interesting experiment. At this point in time, there was no reason for the NL to immediately follow suit.

The AL exhibited an impressive level of foresight by adopting the DH rule. Adding a quality offensive player to the lineup, and subtracting a subpar counterpart made all the sense in the world. Furthermore, the move enables pitchers to focus on what they're being paid to do: pitch. Players near the end of their careers who are unable to competently man their former positions can play out their last few years in the DH slot. Un-athletic players, such as the Red Sox' David Ortiz and the Mariners' Edgar Martinez, were able to put together Hall of Fame caliber careers by using only their bats. Despite the enormous success that the DH position had in the AL, the NL refuses to follow suit.

In recent times, whether the pitcher hits has provided the stark juxtaposition between the two leagues. Prior to the introduction of interleague play in 1997, this was a non-issue. The only time an AL and NL team would face off was in the World Series. Now, interleague play is dispersed throughout the season, as opposed to condensed to a narrow timeframe, as had been the case for it's first 15 or so years. 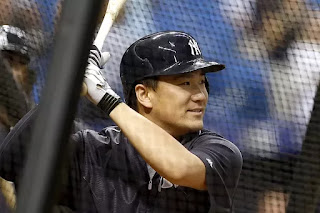 Interleague games are meaningful games. It is unfair to place the AL team at an inherent disadvantage. Since NL pitchers must bat on a daily basis, they take batting practice regularly. The same can not be said of AL pitchers, who only bat during interleague play. When NL teams play in AL ballparks, they have the luxury of simply adding another offensive player to their lineup. Though AL teams, like the Yankees, have historically had success during interleague play, that does not negate the central argument being made here. Rather, the AL's dominance has more to do with the fact that its teams tend to be better.

This argument is about more than the inconveniences being forced upon AL teams. As Yankees fans, we will never forget that fateful June 2008 game in Houston (when the Astros were an NL team), in which Chien Ming Wang suffered a devastating, and arguably career ending, injury when running the bases. The two-time 19-game winner and Cy Young candidate's career was derailed due to NL rules. In the words of Joe Girardi, stories like this are, "not what you want."

Baseball is a ratings driven sport. Fans want offense. Having an automatic out in the lineup unnecessarily complicates games. Benches are much thinner when teams are tasked with pinch hitting for their pitchers multiple times per night. The DH has been a remarkably successful innovation for the AL. Sports, like everything else, must evolve with the times. Though it may have once made sense for the pitcher to hit, that time is long behind us. There is no rational argument that can be made for the pitcher to continue hitting, except that old and stubborn purists are refusing to get with the times.

Granted, some pitchers, like Bartolo "Big Sexy" Colon are exciting to watch in the batters box; however, such obscurities do not merit the continuation of a pointless rule. Unfortunately, there have been no recent developments to warrant optimism for this cause. As fans, we can only hope that one day the powers that be will finally come to the realization that a universal DH is better for all parties involved.